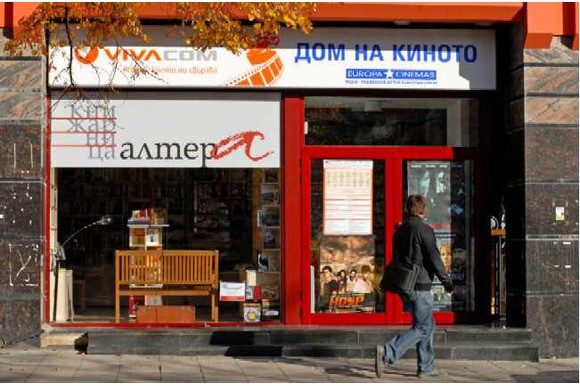 FNE together with Europa Cinemas continues its Cinema of the Month series. In recognition of the hard work and excellence of European cinema operators we choose a cinema from each country covered by FNE each month. We look at the challenges and the successes faced by those cinemas with a special series of interviews that offer insights that other operators can benefit from and a platform for the exchange of ideas. This month we focus on Bulgaria and Vladimir Trifonov who is programme manager 0f the Cinema House in Sofia.

The Cinema House in Sofia is the leading art house cinema theater in Bulgaria. It is managed by Stefan Kitanov (director of Sofia International Film Festival; producer of 'The World Is Big and Salvation Lurks around the Corner' among other titles; distributor; manager of Art Fest) and Dimitar Gotchev (producer of 'Ave' among other films, TV serials, show programmes and advertisements; cinematographer; distributor; co-owner of Camera and Sia Advertising).

Vladimir Trifonov studied Bulgarian literature at Sofia University and has 18 years of experience in presenting, advertising and programming of film releases and film events. He began organizing cinematheque programs in 1993 in his home town of Varna. After 7 years as PR in the leading Bulgarian theatrical distributor Alexandra Films, he was responsible for programming of Euro Cinema (2001-2002), Cinema Center (2003-2006) and Cinema House (2008 - present). From 2005 he is also a programmer of Cinemania Fest. He has organized retrospectives of many classic directors - Ingmar Bergman, Francois Truffaut, Alfred Hitchcock, Federico Fellini, Pier Paolo Pasolini, Michelangelo Antonioni, Luchino Visconti.

1. What is the biggest challenge of running a cinema such as yours?

The biggest challenge in recent years is the changing habits of the viewers. Many of them prefer more and more to see the movies not in theatres, but to download them illegally. So, this motivates us to find different ways to lure audiences, especially the young ones, back into the cinema hall - through special educational screenings, showing them film classics, organising meetings with filmmakers and actors, etc.

2. What kinds of films do you prefer to screen and why?

The best from the releases in our country - not just art-house, but also good commercial cinema. Our special passion is the presentation of classics - this year we've organised a retrospective of Luchino Visconti and all the screenings have been from 35mm film prints.

3. The cinema is home to many festivals, events and film weeks. Why are these important and what do they achieve?

The Cinema House is the home of the main competition of The Sofia International Film Festival and most of the meetings with the guest filmmakers take place there. It is also one of the main cinemas for Cinemania, as well as smaller film events. These events are a unique chance to be show and see many important films from the festival circuit, which, sadly, are not popular enough to attract distributors.

4. What is role of Europa Cinemas for cinemas such as your cinema and why is it important?

The support of Europa Cinema is not just financial - it is more also moral. It is important to know that your efforts make you a part of a bigger family with similar problems and solutions, all of us pursuing our passion to share the pleasure of good cinema with the viewers.

5. How does a cinema like yours serve the local community?

A major part of our strategy is educational screenings, in which we present current strong films and chosen classics to school and university students for free. For us it is important also that we have a loyal audience of people over 40 years of age for whom Cinema House is the cinema theatre they traditionally attend. Part of that audience are the members of the Union of Bulgarian Filmmakers.

6. How does the cinema fulfill its role of cultural diversity - maybe you can give some examples such as programming of European films, films from countries outside MEDIA such as Asia, Latin American and in the Mediterranean region?

Our theatre is home to some very specific events, named FLOWERS OF THE QURAN and SATORI, dedicated respectively to the Mid-Eastern and Far-Eastern Asian cinema. These events have a loyal fan-base and we continue to prepare detailed presentations of interesting and less popular national film programmes. We also organise a number of thematic events and present programmes of films from many different countries.

7. Can you say something about your work with YOUNG Audiences?

We have a special programme called Sofia Film Fest for Students which is dedicated to scholars and university students. It presents films that are part of the main film events in the town introduced and discussed with the audience by well-known film director Georgy Djulgerov and the head of Bulgarian Guild of Film Critics, Antonia Kovacheva. This programme has been the focus of great interest from the young audience.

8. What about the upcoming digitalisation of cinemas?? How will it affect your work and you cinema??

The biggest effect will be in finding the respective funding. It is an upcoming issue which needs to be solved out ASAP. We all hope that digitalisation will give us the opportunity to more easily present not just some hot new art-house hits, but also classics.

Tweet
More in this category: FNE Europa Cinemas: Cinema of the Month – Cinema House, Bulgaria »
back to top