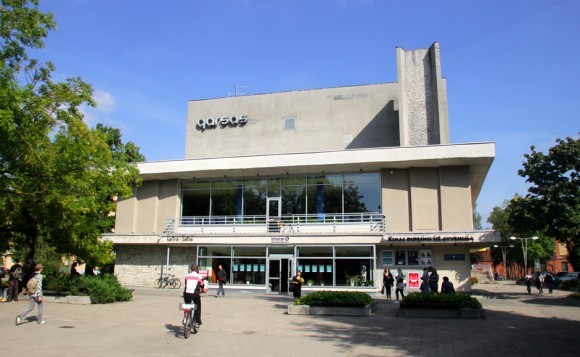 In recognition of the hard work and excellence of European cinema operators, FNE together with Europa Cinemas continues its Cinema of the Month series. This month we spoke with Genė Pučinskienė, the manager of Cinema Center Garsas/Kino Center Garsas since 1992.

Cinema Center Garsas (meaning The Sound) was founded in the town of Panevėžys in July 1928 and hosted the first screening in April 1930. The old building was replaced by a new one with 850 seats in 1968. Nowadays the Cinema Center Garsas has two cinema halls with 745 and 79 seats, and Dolby Digital Surround Ex Sound system. It has been a member of Europa Cinemas network since January 2009 and a member of the Confederation of Art Cinemas, CICAE since June 2012.

In 1993, Garsas became the first and the only stereo cinema hall in Lithuania and the Baltic states.

The main purpose of our cinema is to foster film culture, to promote the art of film, to develop film education for children and young people, and to promote community social integrity. Thus one of the most important tasks is to expand the circle of intellectual film fans and to educate the young audience. This is a big challenge for us, because our theatre is located in a small city with less than 100,000 inhabitants. There is no university in the city and the intellectual viewer is about 20% of all inhabitants.

We prefer to screen films with high artistic value and international recognition, provocative films with an interesting edge and dealing with current problems of society thus able to arouse debate. Only such films resonate in our small community and they are screened under a special heading Atmerk akis–kitoks kinas/Open Your Eyes–A Different Cinema.

But there are no such films in Lithuania, that’s why we started to buy films by ourselves. We are screening a lot of European films, but we also pay attention to the Lithuanian films because we know that it is easier to spread the love of cinema with the national cinema, too.

What is the role of Europa Cinemas such as your cinema and why is it important?

Being a member of the Europa Cinemas network is a big role for our cinema center. First of all, thanks to the financial support, we started to buy and distribute films by ourselves thus trying to compensate for the lack of arthouse films in Lithuania.

Now we have the possibility to use the database of Europa Cinemas. As a member of this network we can evaluate our daily work and see if we are on the right track.. Being a member of Europa Cinemas network was one of the main reasons for the Panevezys city municipality, the owner of Cinema Center Garsas, not to close us when the multiplex Forum Cinemas opened in town.

How does a cinema like your serve the local community?

Thirty years ago Panevezys was famous for the auteurs of the present Lithuanian Cinema. During the decline of the cinema networks in 1988 – 1993 the activity of cinema developers stalled. Since 2005 we have organized each year the workshop Kino kalbos gramatika and the non-professional film festival Aš + miestas= kinas, which is a part of the city’s birthday event. The festival has quickly grown beyond the city limits, and even today it is attended by movie buffs from neighboring countries. We are proud that some cinema professional were schooled by us.

Cinema Center Garsas has run a special program called Cinema under the Sky each year since 2007 from May till August. In partnership with the City event Susitikime penktadienį/Let‘s meet on Friday we screen in the central square of the City each Friday at 9.30pm the best Lithuanian films nominated at Sidabrinė gervė (the Lithuanian national awards), and we organize meetings with the filmmakers.

In the adult Cinema club Veidrodžio ložė/Mirror lodge we show provocative thematic films once a month. After the screening critics, psychologists, and cultural personalities discuss the film with the audience.

We are open to the viewers every day 365 days a year from 8 to 23.30, and we are ready to help them fulfil all their wishes regarding the cinema, from personal events with cinema surprises to individual film reviews. We carry out many social projects: Senjorų kinas/Cinema for seniors, Pelėdžiukų kinas/Owlet Cinema for children. We have special prices for socially sensitive community groups as well.

Because we understand the importance of educating the young intellectual viewers, we pay special attention to cinema education. Cinema education was implemented in Lithuania quite recently, and it is still not regulated by the Ministry of Culture or by the Ministry of Education, so we are trying to compensate for the fact that cinema is not present in schools or in film clubs. We have two educational programs for students from 7 to18 years old: Kino pamoka/Cinema lesson and Kino dirbtuvės/Cinema Workshop.

Because we also aim to expand the educational programmes, we combine cinema lessons with information from literature, history, foreign languages, ecology, ethics, religion, social reality screenings evoked in discussion that take place after the screenings. We provide teachers with a methodological background in cinema education. During the cinema workshops the students get to know the basics of cinema and learn how to create animated films or short films. We also organize seminars, workshops and free screenings for teachers.

This year we managed to set up stationary premises for the workshop and we founded two cinema clubs for students. As we are the only such cinema theater in Panevėžys region we pay a lot of attention to the students from Panevezys region and villages. We carry out our educational activity in an area of 50 to 100 km from our Cinema Theater.

What about the digitalisation of cinemas? How will it affect your work and your cinema?

The digitalisation of the cinema is an inevitable necessity, because 35mm films will soon be rarities. If we are not able to digitalise at least one of our screens in the next two years we will be condemned to a slow death. We hope that the Ministry of Culture will understand this and will generate the funds for the digitalisation of non-commercial cinema theaters.