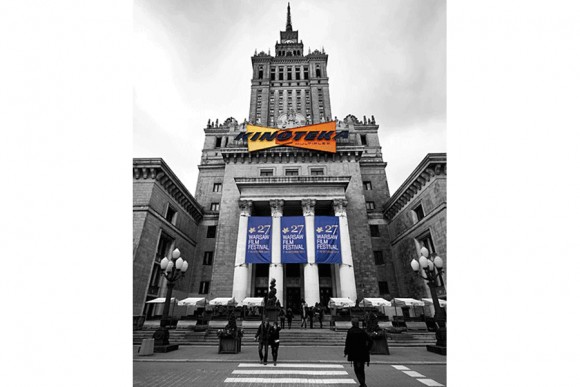 This month we speak with Klara Bogusławska, Manager for Cinema Distribution, and Mariusz Krasowski, CEO - Proxy, about Kinoteka Multiplex, a cinema located in the heart of Warsaw.

Being a part of one of the most recognizable symbols of Warsaw, the Palace of Culture, Kinoteka Multiplex combines 50 years of tradition and atmosphere of post war Warsaw with a contemporary style of the European capital.

At the same time, it meets the highest standards of modern screening rooms that provide convenience and satisfaction to the viewer. The exceptionally rich interior with an elegant foyer, monumental palace spaces with rows of neoclassical columns and crystal chandeliers create an atmosphere that is hard to find in other places in Warsaw. In its repertoire Kinoteka offers both major world cinema titles and biggest premieres of entertainment cinema.

: What is the biggest challenge of running a cinema such as yours?

Kinoteka is a cinema created for people who want to commune with a film in a clear and conscious way. We want to create a space for discussion about the latest currents, trends, changes in the perception and creation of the contemporary cinema. On the other hand, we do not want to limit ourselves to art house productions only. We also want to provide our viewers with entertainment at its best. In the end, many of us just want to relax in the cinema.

On the market there are more and more films, organizations founded, and foundations responsible for new film festivals. The viewers have high expectations, they are hungry for new movies. I think that at this moment the biggest challenge is to satisfy this hunger, to make it possible for viewers to see all the films they are waiting for. To this end, we have created our Kinoteka Club, which creates a film community. We have an opportunity to find answers to the needs of our audience.

The simplest answer to this question is that we want to screen important films: the ones that accompany the viewer for a long time; ambitious cinema; independent cinema. But also entertainment at the highest level, one that brings joy and not dementia. We are not afraid to show movies from new, young creators. We believe that it is important to create opportunities for future generations of filmmakers. That is why we are so eagerly welcoming all festivals at Kinoteka.

Kinoteka is home to many festivals. We are talking about the largest ones and also about those that arise in a sudden impulse, only to quickly disappear from the cultural map of Warsaw. We hosted the Warsaw Film Festival and also Planete + Doc Festival, festivals which have gained a worldwide reputation. And such festivals show the latest film trends we have mentioned in the best way. They offer our viewers the opportunity to meet with filmmakers and the artists. Thanks to them a dialogue is established between the first link of the cinema - directors, writers, actors, producers - and the last one - the viewer.

And because we care about diversity and open space, we invite other festivals to Kinoteka. Some titles can often been seen only at Kinoteka. We hosted, among others, festivals with Turkish, Indonesian, Jewish, Russian, African films. We support festivals focusing on refugees, we have been collaborating with LGBT Film Festival for years. We often reach out to a very narrow audience, working at festivals focused on aviation or snowboarding. Each of these festivals is of equal importance to us, because each of them opens up new opportunities for our audience and it creates space. We do not want to be limited in any way; we prefer to broaden our horizons.

It gives a sense of belonging. It also helps to define our own identity. We are a European cinema, we are a cinema in the heart of a European capital. Europa Cinemas is a brand that clearly shows the audience to which cinema they came and what film they will see. It indicates in advance the repertoire they will encounter.

The festivals are the most important factor and, in our opinion, the most crucial step to meet the audience of all ages. They raise the image of the city, make it more valuable in the eyes of outsiders. This creates new opportunities, it encourages artists to visit and work in Warsaw.

Nevertheless, equally important is for us the local action on the Warsaw residents. We are committed to make the cinema accessible to everyone. For this reason, in recent years we have prepared a number of projects targeted on specific groups. We have adjusted our price list and repertoire to older people who previously often could not afford going to the cinema due to financial reasons. We have also prepared a number of programmes for children, to make them acquainted with the cinema from an early age. We decided to meet the needs of foreigners living permanently in Poland. We are fighting for English subtitles for the Polish films, so that Polish cinema would be available to everyone. Each year brings new ideas that we try to systematically implement.

As we have mentioned, in recent years we have created film projects for children, so that they could discover cinema from an early age. We are hosting film festivals especially for them, and programmes for the youngest audience. We are working with Warsaw schools on a regular basis. We conduct a dialogue with students, we provide teachers with educational materials based on storylines of movies which are currently released in cinemas.

Digitalisation of cinemas was for all of us an important, but also a difficult stage. Eventually it created new opportunities. Movies do not need to be mounted on the mounting table, we do not need to carry heavy copies between rooms. That is from the technical point of view.
Digitalisation was necessary to adapt to the new way in which the contemporary cinema operates. Thanks to digital projectors we obtain the best quality of image, and this is most important to the viewer. The digitalisation has also increased the access of viewers to the independent cinema, which was often hampered by the high cost of production and transport of copies of 35mm. Let us repeat, it has created new opportunities.