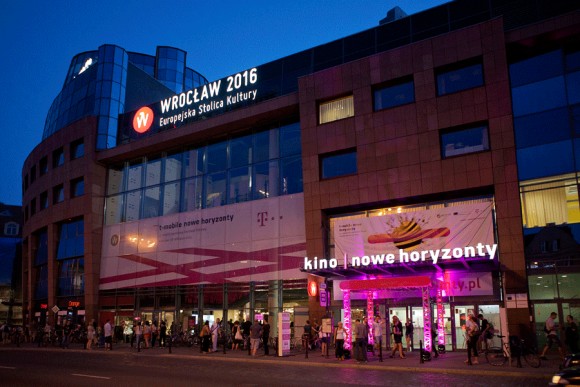 This month we speak with Roman Gutek, head of the New Horizons Association, a non-profit organisation founded in 2003, which organises film festivals such as T-Mobile New Horizons IFF, the American Film Festival and Films for Kids Film Festival, and also distributes films.

Kino Nowe Horyzonty/New Horizons Cinema has nine screens with 2,329 seats. Plenty of film-related activites are organised in a space of almost 7,000 square metres. The programme of New Horizons Cinema is dominated first and foremost by European artistic cinema.

Roman Gutek: The New Horizons Association has been managing and programming the New Horizons Cinema since 31 August 2012. For over a dozen years before this, it was a commercial cinema. The first thing we changed was the programme and the interior design of the building.

We are gradually changing the space itself, but this is a process that can take a couple of years. We are working on establishing the cinema as a place that the inhabitants of Wrocław associate not only with good films, but a venue where they can spend their free time. Presently, the New Horizons Cinema is slowly transforming into a cultural city center as our everyday activities also include broadcasting transmissions of opera, ballet and theatre shows, as well as film showcases of art exhibitions.

The cinema also hosts concerts, exhibitions, lectures and social events. The space offers an active bistro, coffee shop and a film-themed bookstore. So far, the New Horizons Cinema has been visited by 1.3m viewers.

R.G.: The New Horizons Cinema has nine screening rooms with 2,329 seats and two of these rooms are really big - the largest has 566 and the second 441 seats. It doesn't make sense to screen niche production in these two rooms. We've always known that we will screen the more challenging, ambitious cinema in the five smaller rooms. This was the strategy that we implemented almost three years ago when we took over the cinema.

Another reason for this is that our building is a very big space, almost 7,000 square metres. We are paying a commercial rent and while we do get financing from the city, we still need to earn funds to support the cinema. We also screen commercial titles as well as high quality popular cinema. By this I mean titles like the Hobbit, Hunger Games or James Bond.

The programme of the New Horizons Cinema is dominated first and foremost by artistic cinema that is mainly European. We also screen a lot of Asian as well as South American films and independent productions from the USA. As 30% of our cinema's activity is financed by the City of Wrocław, there is an obligation to deliver a programme that will allow the viewers to choose from a broad spectrum of titles. This is also the role of the New Horizons Association, to showcase a cinema that is less present on the market, challenging and harder to reach for the audience. These are also films that are closer to my personal taste.

R.G.: The New Horizons Cinema hosts several film festivals and retrospectives. Our main events are the T-Mobile New Horizons International Film Festival (in July) and the American Film Festival (in October), both organised by the New Horizons Association. Apart from that, each month we host several smaller retrospectives, festivals or presentations of cinema from different countries. This is a way to broaden the cinema's offer with titles that are not available in regular distribution.

We also try to showcase the work of chosen directors and invite them to Q&As with the viewers. Our retrospectives always have an educational aspect. We help our viewers to discover important and interesting filmmakers, whose films often don't make it into regular local or international distribution. The program of the T-Mobile New Horizons IFF often includes a lot of experimental cinema and films that are challenging, often much longer than normal productions.

The festivals are a chance to showcase films that are unavailable to viewers in their everyday life. Often these retrospectives and festivals are paired with exhibitions and other accompanying events. This was the case with MIASTOmovie:WRO, an event that treats the documentary film as a starting point to a broader discussion about the city of Wrocław. A Werner Herzog retrospective was accompanied by a special exhibition presenting the director's life's work and Food Film Festival is designed to popularise not only films but also the art of cooking and the social meaning of food.

R.G.: For institutions like our cinema, financing is crucial. Firstly, it greatly diminishes our financial risks because the donations from Europa Cinemas, although not very high, allow us to maintain our activity. It is an significant amount in our budget. But what is even more important than the fund is the awareness that we are part of a wonderful European cultural project and we can exchange our knowledge and experience with cinemas from several different European cities.

R.G.: We are working with several different local festivals and institutions, not only the cultural ones. A great example is our cooperation with an interdisciplinary festival Avant Art, that presents audiovisual arts, music, theater but also has a film section. We are also partnering up with art and literature festivals and city institutions that often use our cinema space for their events.

We are working with the Jazztopad Festival and organise screenings for the younger audiences with live music as well as screenings of movies about jazz musicians and "concerts in the dark". We are also partners with Musica Electronica Nova and the International Short Story Festival. We also invite Polish and international filmmakers to visit Wrocław.

The cinema integrates the local community by offering special film programme cycles like family mornings and Wednesdays for the seniors, psychoanalytical themed meeting with the movie projections and debates, screenings for the parents with toddlers and so on. We often make our space accessible to several exhibitions, conferences or social events such as Buy a Book, when we organized a book market that benefited the children in need.

We organise a food market that accompanies our culinary festival and invite producers of high quality, healthy products from Lower Silesia. The cinema is often the space for the Ręki Dzieła Fest, a festival of handmade artwork produced in Wrocław. We are open to new ideas that come to us from the outside, like the Polish Cinema For Beginners cycle - a series of screenings of Polish cinemas with English subtitles created for foreigners living in Wrocław.

The event was met with tremendous interest from the viewers. The New Horizons Cinema is a part of the Wrocław European Capital Of Culture 2016 Programme and a chance to support different Wrocław film and social initiatives is very important to us.

R.G.: The New Horizons Association runs two important educational projects throughout the academic year: the countrywide and pioneer programme New Horizons of Film Education, as well as the project which is organised together with Wrocław City Council, Cinema-School-Culture. Every month, the cinema is visited by approximately 8,000 pupils of different ages, from kindergarden to secondary schools to university students.

Our educational programme consists not only of film screenings followed by lectures and debates on sometimes challenging topics, but also diverse workshops and games. To vary the film programme we often invite guests and experts to contribute to the subject. We invite talented animators to work with children. Additionally, we organise film workshops for pupils as well as teachers and parents. Also, during the holidays in Wroclaw, teachers and parents can participate in specialized film workshops that raise various subjects related to film studies (history of cinematography, film editing or movie language, etc.).

There are also two special educational projects for adult students: a four-years long course of the history of world cinema and two-years long course of the history of Polish cinema. For the past three years, New Horizons Cinema has been participating in the Young Audience Award run, coordinated by the European Film Academy. We believe that those pupils and students are going to be our future viewers and participants in film festivals. This is one of the reasons we engage ourselves so passionately in the educational activities.

R.G.: First and foremost the cost of film print production had decreased and this has allowed the costs of distribution to drop as well. A 35 mm print used to cost 1,000 to 1,500 EUR and the films had very few prints. A DCP print production is much cheaper and the problem of copy availability has disappeared.

The cinema can now get any film at practically any moment. The costs are lower so the distributors can promote more titles. This is a plus for smaller cities and towns that no longer have to wait in line to screen a title. This also brings down the costs of cinema operators. There are cinemas with multiple rooms that are operated by one operator. A DCP screening makes the everyday job of an operator much easier.

Contact
Kino Nowe Horyzonty
ul. Kazimierza Wielkiego 19a-21, 50-077
Wrocław, Poland
www.kinonh.pl
This email address is being protected from spambots. You need JavaScript enabled to view it.