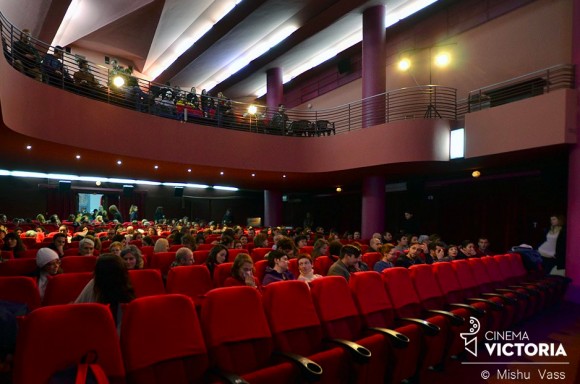 This month we focus on Cinema Victoria and we speak to its director, Gabriela Bodea.

Cinema Victoria is located in a building from 1927 in Cluj-Napoca, the second biggest city of Romania. It has almost 300 seats and a balcony that many find very fashionable. The cinema is a property of the local authorities and it is used by the Victoria Film Association. Cinema Victoria is one of the main venues of the Transilvania International Film Festival, held this year between 31 May and 9 June, and also for Comedy Cluj International Film Festival.

Gabriela Bodea has been the manager of Cinema Victoria since 2011. She was the director of the company administrating the cinema network in the northwest of the country between 1991 and 2006. Since 2001 she has been involved in the organisation of Transylvania IFF.

My return to a single hall cinema, given the two multiplexes with 24 screens in town that have absorbed quite well the best cinema audience in Romania, and an audience that I have created together with my team in 15 years is, indeed, a great challenge.

When I took the management of Cinema Victoria, I set a few goals: to get audiences back to the traditional cinema hall, and to attract a diverse audience, mostly children and young audience. Also, to manage the cinema in a way that it should become financially independent, and to transform it into a cultural center focused mostly on cinema, a well-known center which would conserve the art house range.

Victoria is a “traditional” cinema, and it is a member of Europa Cinemas network. For this reason, the programme is made of titles promoting the European cinema, art house films, films d’auteur, and Romanian films.

There is a great national diversity of titles, because we have screened films from all the European countries, and the audience got to know film industries that were kind of far away, such as Scandinavia or Turkey.

Cinema activity in Cluj-Napoca is one of the most vital in Romania, and we had a mature audience back in the early 90’s already. That’s the reason why two of the most important film festivals in Romania, Transilvania International Film Festival (in its 12th edition) and Comedy Cluj International Film Festival (5th edition) were initiated in Cluj-Napoca. Cinema Victoria is one of their main venues.

Starting in 2012, Victoria Film Association wanted Victoria to also screen titles already presented in other film festivals in Romania, and also premieres and special events around new Romanian films. We already presented the most acclaimed films from Anim’est, the biggest animation film festival in Romania), Mediaş Central European Film Festival – MECEFF, One World Romania, Hungarian Film Festival, and ASTRA Film. Cinema Victoria hosted the first edition of the International Short Film Festival Cluj-Shorts in April 2013. We are very keen in hosting such events because they help us gain diversity that the young audience is seeking.

I witnessed the entrance of the first three Romanian cinemas in Europa Cinemas network in 1998, because one of them was located in Cluj-Napoca, and I was the director of the cinemas network in northwestern Transylvania at that time.

That was the first time when the general director of Europa Cinemas, Claude -Eric Poiroux, visited Romania, due to the fact that he evaluated the cinemas. Since then we very much wanted that the number of Romanian cinemas integrated in this network would grow.

The prestige of our cinema is reinforced by the name of Europa Cinema, for our audience this is a guarantee of a carefully selected and diverse repertoire.

Being a member of Europa Cinemas is to be connected to the European cinema community and not only the European one because the network has been extended to Africa, Canada, Latin America, etc. We get to know all the news in the field, and the annual conferences are highly useful allowing us to meet our colleagues from the network and also technicians and specialists.

I cannot ignore the annual support from Europa Cinemas. Of course it’s requesting from us a discipline in the repertoire, but it is often oxygen support for our eternally insufficient budget.

The local community is very happy with us because we are offering repertory niche and art house films, and also because we are screening mostly European productions.

Given the fact that Cluj-Napoca is a strong university centre and students are quite interested in movies throughout the year, we have a regular programme together with the National Film Archives called Victoria Cinematheque/Cinemateca Victoria. Another programme is Wednesday Is the Documentary Day/Documentarul de miercuri with Romanian and foreign documentaries on various topics. We also have good collaboration with the cultural institutes of France and Germany in Cluj-Napoca. We had the Francophone Film Days – Canada, the French Film Festival, Very Short Film Days – each of them presenting for the first time in Romania awarded films for three or four days.

We have some special programmes for children throughout the year when we are inviting groups of children for special screenings. Most of the time these screenings are followed by discussions using visual aids.

We want to educate our audience’s taste from early age, which is why our audience is composed mainly of pupils and students. Beside the free screenings at 3 p.m. they have a discount of 50% from the ticket fare for all the other screenings.

We also have screenings free of charge for the entire audience, and other times only for disadvantages categories such as children from foster homes, special schools or children with poor financial possibilities.

What about the digitalisation of cinemas? How will it affect your work and your cinema?

We can hardly wait to use our digital projector. Our plan is to welcome with it the new edition of Transylvania Film Festival. There are already distributors we cannot reach because we can’t project from DCP projector.

Of course, we will be prepared for the day when there won’t be any screenings from 35 mm. We will keep the projector anyway, in the case the nostalgic audience will want to see films on 35 mm years from now.