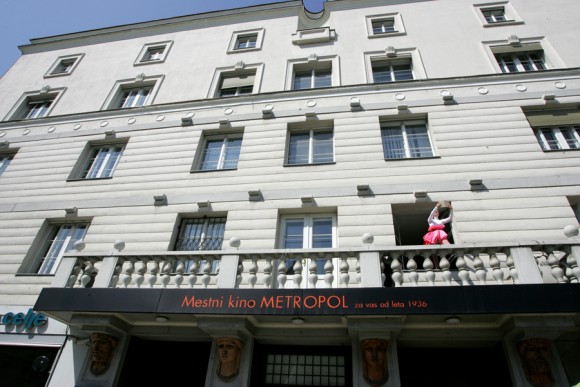 This month we speak with Samo Seničar, the programmer of Mestni Kino Metropol from Celje, which is the third biggest town in Slovenia.

The City cinema Metropol in its current form was founded in 2004 although it has a history leading back to 1936, when the first movies were screened in the hall conceived by the architect Jože Plečnik. It is situated in the center of the town in the pedestrian zone.

The cinema is devoted to domestic, European and independent film and it was digitalized with a Christie Solaria One+ projector in 2013. Metropol is a non-governmental organization in a city with 37,000 inhabitants. It has been a member of Europa Cinemas since 2005.

Samo Seničar: As I learned recently, art house cinemas across Europe share the same challenges and problems. One of our biggest challenge is probably how to attract enough audience as we have only one screen with 288 seats. As a consequence, screening art and independent films is a real challenge for us. The cinema is also located in a city center that has devaluated over the years as the shopping malls and multiplexes rose in the suburbs of the city. Celje is a relatively small town with 37,000 inhabitants, so that poses another challenge for us.

Young audiences are another challenge. As we only screen domestic, European and independent movies, we are not so interesting for the younger public. We are art cinema purists as we don't sell popcorn and try to educate people that they don't have to eat junk food while watching a movie.

One particular problem with Mestni kino Metropol is the privatization process. At the moment we don't know what the future holds but we have the municipality on our side, hoping that they will take care of the hall as it is of cultural importance to the city. In 2015 we had more than 18,000 admissions, a record breaking number that we wish to overcome in 2016.

Samo Seničar: From the get go in 2004 we decided to screen only non-commercial films with an emphasis on domestic and European movies. Over the years we made Metropol a brand which people recognize as a place of quality films. Our programme consist of regular screenings, but also special presentations of authors or the state. A Week of Akira Kurosawa would be something that you could enjoy at Metropol. A Cycle of Animated Films for Adults is also an example of our concept. We try to include as many associations and specialists as possible when we have an event following the screening, as we are aware that only screening a film isn’t enough for today’s cinema visitor. We also try to organize Q&A's with authors and specialists.

We follow the same principle when arranging school screenings. We offer to schools quality films accompanied by film education and teaching materials. More and more schools decide to participate in our programme as film education is not (yet) institutionalized in Slovenian schools. Our project gives a necessary platform for pupils and students to get to know more serious film content.

One important part of programming are the accompanying events, that give the so called added value to the cinema experience. In that manner we regularly have jazz concerts in the foyer of the cinema as we think that that music style goes hand in hand with art house movies. We sometimes organize exhibitions, book presentations and lectures in the foyer.

Samo Seničar: Some of the festivals that we organize or host are niche festivals, specialized in only one kind film genre. During these festivals we aim at getting additional admissions by people who are not yet familiar with our programme and so making a platform for us to introduce our work to them. Some of the more successful festivals in our cinema are the Mountain Film Festival, which attracts a more and more diverse public to the cinema, and our own Festival of Short Student Film.

Every year we organize a free video workshop for students and try to transfer the knowledge of filmmaking to youngsters. We host Slovenian film professionals during the festival and prepare a Q&A with them, so the students have a great chance to learn firsthand. The guests so far were Alen Pavšer, Mitja Ličen, Sonja Prosenc, Miha Hočevar, Neven Korda...

A few years back we co-hosted a Festival of Lesbian and Gay Films, we are establishing a co-operation with the Festival of European and Mediterranean Film. These festivals also offer an opportunity to screen movies that sometimes don't come to the regular distribution and in that way contribute to the diversity of our programme.

One of our biggest projects is also Cinema Under the Stars which we organize since 2005. It’s free of charge and we change the location every few years, hoping to revitalize the city center. We are screening in this project  titles that we have screened over the year. Being free of charge gives us an opportunity to address the wider public and introduce our regular programme to new audiences. As it costs a lot to prepare such a huge and demanding project ,the future of Cinema Under the Stars is not certain.

Samo Seničar: Being a member of Europa Cinemas is a privilege and with the membership you not only get an awesome partner but also the bragging rights. We are very proud to be a part of this European family which gives us stimulation for our work. Being a member of the community is also very important for our existence and the funds from Europa Cinemas are an important element of our finances.

It also gives an opportunity for networking, learning good practice, education of our team through various workshops and seminars. The representatives of Europa Cinemas are always available for problem-solving or just for some good advice and guidance, which means a lot. Being a member of such an organization lifts our cinema from local to international importance.

Samo Seničar: Despite the fact that Celje is the third biggest town in Slovenia, it is still a small community with 37,000 inhabitants and Metropol is the only place in town that offers a different perspective on film industry. With our programme we are not only unique in town but also in the wider region. In that aspect we take our role very seriously and carefully pick the titles that we screen.

The cinema offers a window to different cultures, we try to encourage critical thinking and to introduce different artistic expressions. In some sort we are an educational institution. But on the lighter side our cinema is a meeting point open for everybody who wants to enjoy good company, enjoy a great movie or listen to live music. Being open to everyone, and especially to new ideas, is what makes us strong. The homely feeling is also something we care about a lot, so in a way we think of ourselves as the second home for everyone who wants to spend some quality time.

Samo Seničar: Young audiences are very important for us as they represent almost a third of our annual admissions. Every month we programme a special event for youngsters called Animated Movies Rule. We usually book dubbed versions of animated films. As we noticed that kids are used to getting a popcorn while visiting a movie theatre, we published an etiquette leaflet about behaving in cultural institutions. The project was very well received by parents and we are noticing that more and more families visit Metropol.

Our main focus regarding young audiences are school screenings. As mentioned above we try to book movies that are compatible with our programming philosophy. We don’t want a school screening to mean locking up kids in a dark room and showing them a random movie. It must be a cultural event for everyone involved. From the start we try to encourage teachers and professors to include the movie in their curriculum and prepare the students before coming to cinema. We offer teaching materials for schools. When the students come to Metropol, they are usually already prepared and know what they are going to watch. A short introduction by one of our lecturers is usually made and after the screening we have a Q&A, trying to engage the students in a conversation and think outside the box. Getting them emotionally involved is also a part of the Q&A after the movie.

We are getting good feedback from teachers and students and we are noticing that more and more students come to evening, regular screenings. In the end it is probably the most important thing that we do and can happen to us - getting more and more young audiences on regular programme.

Samo Seničar: Mestni kino Metropol is digitalised since november 2013. It was a project that we couldn’t have managed without the help of the Slovenian Film Center, which granted us a quarter of the investment. The other three quarters were secured by ourselves.

Since the digitalization, the admissions went really up as we can finally screen movies when they actually come to Slovenia and not having to wait for the 35 mm copy to be free (for art house movies often there used to be only one copy of the film, so sometimes we had to wait up to a month to get the movie).

A digital projector also provides an opportunity to easily host festivals as the handling of the film copies is really easy nowadays. For old times sake we conserved one of the 35 mm Meoptas, but we rarely use it.

Contact:
3000 Celje, Slovenija
This email address is being protected from spambots. You need JavaScript enabled to view it.
Mobile: +386 (0) 40 296 701
www.kinometropol.org