Prague, 11 September 2013 –The 16th annual Slovenian Film Festival begins today in Portorož (11 – 15 September 2013). Each year it presents the Slovenian film production of the previous year. A Czech-Slovenian co-production gathering will be held as part of the festival’s special programme, with producers from both countries participating.

The Slovenian film festival, a place for filmmakers, the professional public, foreign guests and film fans to gather, officially begins today, though yesterday, on the eve of the festival, enthusiasts could feast on a cinematic delicacy: the film The Beginning Was Sin (Am Anfang war es Sünde) from the classic Czech director and founder of modern Slovenian cinematography, František Čáp, who lived and worked in exile following the Second World War.

On Friday 13 September a Slovenian-Czech co-production gathering will be held for film professionals as part of a special programme for film professionals. The programme will begin with an introduction of the basic facts about both countries and will continue with a case study of the film A Night Too Young (Příliš mladá noc) from producer Jiří Konečný, which originated as a Czech-Slovenian co-production in 2012. The story of two twelve-year-old boys, who accidentally find themselves at a party in the flat of their young teacher, where they experience their first encounter with love and sexuality, was directed by Olmo Omerzu, a Slovenian living in Prague. The creative team of Konečný-Omerzu is now preparing another joint effort, Family Film (Rodinný film), once again as a Czech-Slovenian co-production.

The gathering will continue with a round-table discussion, with selected Czech and Slovenian producers attending. Czech cinematography will be represented by three young producers: Jiří Konečný from ENDORFILM, who has several successful international co-productions under his belt, Hanka Třeštíková from PRODUKCI TŘEŠTÍKOVÁ as a representative of Czech documentary work and Peter Badač from NUTPRODUKCE, whose work includes the production of the successful short animated film Pandas, awarded this year in Cannes.

On behalf of Slovenia it will be Miha Knific from NUKLEUS FILM SLOVENIA, focusing on production of commercials and feature films, Jaka Oman from INVIDA, which helps independent Slovenian and foreign filmmakers, Viva Videnović from ZAVOD STRUP PRODUKCIJA for animated work and also the talented director and producer Rok Biček from CVINGER FILM, whose film Class Enemy was recently screened as part of the Film Critics’ Week in Venice. “This event follows the presentation of new Czech and Slovenian cinematography, which took place at the end of March in Ljubljana,” added Markéta Šantrochová from the Czech Film Center. “During that occasion we looked for an opportunity to connect our countries on the level of film professionals, especially in light of the successful projects from endorfilm and Olmo Omerzu. Moreover, our countries are relatively close to each other, which really facilitates communication. For a number of years now we have been cooperating with our Slovenian colleagues at a joint stand in Berlin and so our producers also often encounter each other. We hope that the gathering in Portorož will bring more opportunities for cooperation.”

For more information on the festival see www.fsf.si

Contact:
Denisa Štrbová
e-mail: This email address is being protected from spambots. You need JavaScript enabled to view it.
tel: +420 221 105 398
www.filmcenter.cz 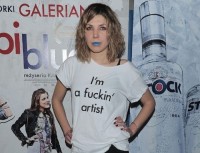 GDYNIA: Katarzyna Rosłaniec plans to leave the world of teenage girls in distress and is developing a drama inspired by  her present life experiences.

GDYNIA: Gdynia Film Festival focuses on showcasing Polish cinema, but the Polish Film Institute Awards remind the filmmakers and viewers how important it is to promote film and develop events and ideas that build audiences. During a special celebratory gala held at Gdynia on 10 September 2013, the Institute recognized the achievements of those people and institutions that were instrumental in publicizing Polish cinema both locally an abroad in the past year.

GDYNIA: Paweł Pawlikowski explores the issues of family and identity in his new drama Ida, , screening at the 38th Gdynia fest, which recounts the story of Anna, a novice in a convent determined to contact her only living relative, Wanda, before she takes her vows. Wanda informs her of her Jewish heritage and together the two women embark on a journey to discover the tragic history of their family.

GDYNIA: Tomasz Wasilewski has created an emotional image of a man struggling with his identity in Floating Skyscrapers, screening at the 38th Gdynia fest, which follows the life of a young man who leads a "picture perfect" life, with his rocketing career in professional sports and a loving woman at his side. When he discovers that he is attracted to another man he is forced to re-evealute everything he thought he believed in. Wasilewski creates an powerful story confronting what it means to finally grow up.

FNE at Gdynia Film Festival: One Way Ticket to the Moon

GDYNIA: Jacek Bromski goes back in time with his coming-of-age road movie set in 1969.

GDYNIA: Wojciech Smarzowski explores the dark side of human nature in his box office hit drama based on the real workings of a traffic police officer.

FNE at Gdynia Film Festival: The Girl from the Wardrobe

GDYNIA: Bodo Kox creates his own surreal outlook on what it means to be alone and enter relationships with The Girl from the Wardrobe, in which protagonist Jacek is taking care of his autistic brother Tomek. They have their own routine that is broken when an elderly neighbor who looks after Tomek from time to time is unable to help them. Jacek has to turn to a mysterious girl who just moved into their building. The autistic man strikes up an unlikely friendship with the beautiful, neurotic woman.

PRAGUE: Applications for funding for more than 400 Czech film project proposals have poured into the online site of the Czech Cinematography Fund this week in the wake of the Czech government's ratification last last month of the new film law governing the body.