BERLIN: Joshua Z Weinstein's featured debut Menashe (USA, 2017) which is one of the only movies to be performed in Yiddish in nearly 70 years, will be shown at 67'th Berlinale Form section.

Submissions are now being accepted for Polish films and projects as part of Polish Days 2017, to be held August 8-10, 2017, during the 17th T-Mobile New Horizons International Film Festival (August 3-13, 2017).

Polish Days, the most important industry event at the T-Mobile New Horizons International Film Festival, is organized jointly with the Polish Film Institute. At special closed screenings, it offers members of the international film industry opportunities to view the latest Polish projects in all stages of production, including completed films and fragments of films in postproduction as well as taking part in presentations for projects in development. As each year, organizers expect about 200 guests including sales agents, distributors, coproducers, festival programmers and producers to be in attendance. Polish Days offers an unparalleled opportunity for Polish producers and filmmakers to promote their projects and plan festival strategy network with international partners.

Organizers of Polish Days encourage submissions of new Polish films as well as works-in-progress (i.e. fragments of films in production) for viewing during closed screenings, as well as for projects in development to take part in a pitching session. Submission deadline: May 22, 2017. Submission form

During the event, partners from postproduction companies will award selected projects prizes in the form of postproduction sound and image services on preferential terms.

For the second year in a row, EAVE and the Polish Film Institute will award a grant for a Polish producer and Polish film project in development, which will cover costs of participation in the prestigious EAVE production program in 2018.

Polish Days is an industry event with an excellent track record. In previous years, films presented at Polish Days have included Spoor, The Last Family, The Erlprince, I'm a Killer, All These Sleepless Nights, Warsaw 44, Papusza, Floating Skyscrapers, The Congress, You Are a God, Gods, Walesa, Man of Hope, Life Feels Good, and Obywatel.

Who Is Partying At ... 2017-03-10
View the embedded image gallery online at:
http://filmneweurope.com/blog/michal-klimkiewicz?start=80#sigProId522ff5bc9d

With 141 films to be shown, the programme of the fifth edition of LET’S CEE 2017 is going to be more wide-ranging than ever before. Austria’s only festival for Central and Eastern European films clearly remains on a growth path.
From March 21st to 27th, 141 feature films, documentaries and short films from Central and Eastern Europe as well as from Austria will be presented at the now fifth LET’S CEE Film Festival, at a total of six venues in Vienna, and, for the first time, at two new venues in Graz and Villach. A new record will be set with a total of 183 screenings. The same goes for the number of guests coming from foreign countries, among which luminaries like directing genius Béla Tarr from Hungary, movie icons like Ksenija Marinković from Croatia and Lazar Ristovski from Serbia and the Bosnian Oscar winner Danis Tanović will be present.

The regular ticket sale started already! With a regular price of 9 Euros (8 Euros at the pre-sale) and a reduced price of 7.50 Euros (pre-sale: 7 Euros), the tickets are still cheap – especially seeing as a Q&A with film guests is often included. With the festival passes which allow you to see all films for 70 resp. 60 Euros (subject to availability), you can enjoy films for a comparatively small amount of money.
With this in mind: LET’S CEE you soon!

With the new section goEast Gurus, goEast - Festival of Central and Eastern European Film (to take place in Wiesbaden, Germany, from April 26th to May 2nd 2017) is opening up a special platform to filmmakers whose pioneering work has been the object of particular admiration from audiences and festival organizers for years now. Independent of the premiere status of the works in question, goEast Gurus will present cinematic highlights from the international festival circuit, straight from Cannes, Venice, Toronto or beyond. The first edition of this unique section wouldn't be complete without the presence of an important contemporary director: Cristi Puiu. His most recent outing, SIERANEVADA, which was nominated for the Palme d'or, will be screened in goEast Gurus, alongside many other compelling films from treasured auteurs.

The Competition for Fiction Features and Documentaries promises its share of surprises, discoveries and controversies. Already confirmed for inclusion in the program is the Croatian debut film QUIT STARING AT MY PLATE (NE GLEDAJ MI U PIJAT) by Hana Jušić, in which a young woman (Mia Petri&#269ević) attempts to break free from her family after her tyrannical father suffers a stroke. The program also features EXILED (PELNU SANATORIJA), a Latvian-Lithuanian co-production directed by Dāvis Sīmanis. Sīmanis' film is set in Latvia in the last year of the First World War and tells the story, based on historical fact, of a German surgeon who happens upon the sealed-off world-within-a-world inhabited by shell-shocked patients in a hospital. Lead actor Ulrich Matthes is expected to attend the festival.

In addition to vying for the right to take home the Golden Lily for Best Film (endowed with prize money of 10,000 euros), the featured productions, chosen by the goEast selection committee chaired by festival director Gaby Babić, will also be competing for the Award of the City of Wiesbaden for Best Director (7,500 euros) as well as the Award of the Federal Foreign Office for Cultural Diversity (4,000 euros). In all, ten fiction features and six documentary films, together representing the diversity of Central and Eastern European auteur cinema and painting a nuanced emotional portrait of Central and Eastern Europe, are nominated to take part in the competition. The prize winners are determined by a five-member international jury and the awards ceremony at Caligari FilmBühne is the jubilant climax of the festival. A jury representing FIPRESCI also presents the International Film Critics' Award to one fiction feature and one documentary film respectively.

The Open Frame Award, worth 5,000 euros, is awarded in the framework of the Experimental Film and Video Art Competition. The award, endowed by BHF-BANK Foundation, honours the best work from young artists or filmmakers from Central and Eastern Europe or from students from one of Hessen's film or art academies.

Further prizes, with a total value of 23,500 euros, are awarded in the festival's own dedicated projects for the fostering of young talent. In the East-West Talent Lab, the goEast Development Award, endowed with prize money in the amount of 3,500 euros by Kulturfonds Frankfurt RheinMain, goes to the best film project, while in OPPOSE OTHERING! five directorial duos are set to receive productions grants of 4,000 euros per team.

Brexit, the recent election campaign in the USA, radical Islamism, populism - all of these phenomena make it abundantly clear that the fight for solidarity and equality around the world is far from over. With the support of Foundation “Remembrance, Responsibility and Future”, goEast is making a contribution to the cause: The goEast project OPPOSE OTHERING!, along with the section of the same name, is devoted to the examination of various manifestations of othering - a term denoting focussed misanthropy directed at groups and the marginalisation of people of different social, religious or ethnic backgrounds, sexual orientations and/or gender identities. The featured films treat solidarity and civil courage and portray individuals who have chosen to take a stand against discrimination. Five young directorial duo teams from Germany and Central and Eastern Europe are currently in the process of completing films that deal with othering, to be premiered at goEast. Ten new filmmaking tandems will participate in a workshop and film program at goEast 2017. Five of the nominated tandems will be awarded production grants in the amount of 4,000 euros each for the realisation of their project ideas. // www.oppose-othering.de

The complete program for the 17th edition of goEast - Festival of Central and Eastern European Film will be announced at the beginning of April.

The first press release for goEast 2017, published in January (originally from 25.1.2017, with a thematic focus on women in film) can be found at here

goEast offers representatives of the reporting press the opportunity to register for professional accreditation free of charge. We would like to extend a very warm invitation to join us in Wiesbaden from April 26th to May 2nd 2017 for the 17th edition of our festival and we look forward to your coverage.

The accreditation form and further details are available here

STRUCTURAL CONSTELLATIONS is an original Master Class in two 4-day Modules for those professionals who are concerned with the major artistic decisions - producers, screenwriters, authors-directors, new media designers, script consultants - of any production and has been elaborated by the widely recognized specialist Matthias Varga von Kibéd.

Dates of the Modules

The fee includes tuition, accommodation and meals. Travel costs are not included.

Up to 11 participants (in teams or individual) are eligible for a scholarship covering part of the travel costs and full subsistence expenses, provided that they have not already benefited from another scholarship for the same expenses. The scholarships are primarily for participants from low income countries. 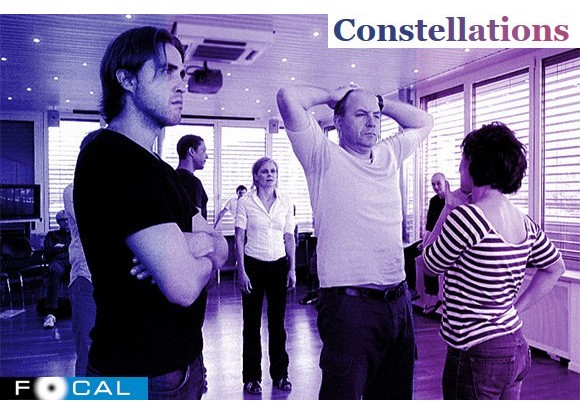 All details about the programme can be found at www.constellations-story.net

and the application form at www.constellations-story.net/applying.html

What you get from STRUCTURAL CONSTELLATIONS

With the new section goEast Gurus, goEast - Festival of Central and Eastern European Film (to take place in Wiesbaden, Germany, from April 26th to May 2nd 2017) is opening up a special platform to filmmakers whose pioneering work has been the object of particular admiration from audiences and festival organizers for years now. Independent of the premiere status of the works in question, goEast Gurus will present cinematic highlights from the international festival circuit, straight from Cannes, Venice, Toronto or beyond. The first edition of this unique section wouldn't be complete without the presence of an important contemporary director: Cristi Puiu. His most recent outing, SIERANEVADA, which was nominated for the Palme d'or, will be screened in goEast Gurus, alongside many other compelling films from treasured auteurs.