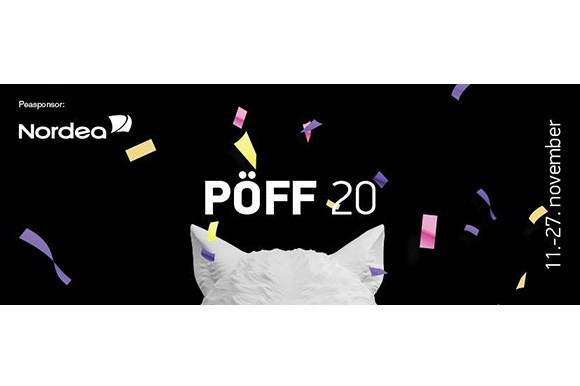 Reaching its 20th edition this year, the Tallinn Black Nights Film Festival aka PÖFF (derived from the festival’s name in Estonian), the only FIAPF-accredited (International Federation of Film Producers Associations) competitive non-specialized film festival in Northern Europe takes place on 11-27 November. Spanning over the two biggest cities of Estonia – the capital Tallinn, and Tartu – and screening at nine locations which include two Apollo multiplex cinemas, cinemas Artis and Sõprus, Kosmos IMAX, the Tallinn Zoo and the Seaplane Harbour. The festival will once again seek to create a memorable celebration of film and culture for Estonian and international film fans and industry representatives alike.

Having been brought to life in 1997 by festival director Mrs Tiina Lokk as a small Nordic film showcase with 25 films in the programme and 4,500 admissions sold, the festival has seen a dramatic rise in terms of numbers over the course of 20 years. The 2015 year edition saw more than 80,000 admissions, 289 feature films from 80 different countries and more than 700 film professionals attending the festival and industry events. In 2014, the festival was recognised by the International Federation of Film Producers Associations as the only competitive non-specialized film festival in Northern Europe, an honour shared by 14 other festivals in the world, such as Cannes’, Berlinale, Venice etc.

The festival has a full-fledged audiovisual summit Industry@Tallinn run in cooperation with the Baltic Event co-production market, which returns for the 5th year on 17-24 November. Some highlights include the annual conference of Europa International, a joint body of leading European film distributors (17-20 November), the European Film Forum Tallinn 2016 conference on the digital single market initiative held in co-operation with the European Commission, Storytek – the launch of a new bootcamp for intellectual property creators, and much more.

Last year, a new programme – the First Feature Competition – was introduced and instantly attracted international attention and recognition. The programme shows full-length movies from rising talents, chosen carefully by the festival’s international team. Selected movies hold a certain character of original ideas and strong cinematographic vision. Yet again, all the films screened are world or international premieres. The competition movies are announced on 11 October and the tickets are sold from 14 October.
The international jury issues the following awards to the best of the First Feature Competition:

• Award for the Best First Feature (grant of 5,000 euros, shared by the director and the producer)
• Two Special Jury Prizes

The third programme is the Estonian Film Award, presented by festival's partner Postimees, where the international jury chooses the best Estonian movie from amongst the nominated films of the ongoing year giving it the award for the Best Estonian Feature (grant of 3,200 euros, shared by the director and the producer).

As in the previous years, in addition to PÖFF’s main programme there is a wide selection of special screenings and non-competitive programmes like the Fashion Cinema, Doc@PÖFF, the Gourmet Cinema, the Midnight Shivers, sports movies in cooperation with the Estonian Olympic Committee, the Panorama programme which gives an overview of the masterpieces of the previous year trends in the world of cinema, and a selection of the most experimental and unique movies in the programme Forum. Altogether, PÖFF shows about 250 full-length films from more than 70 countries.

Two films in the programme of Doc@PÖFF will see the return of directors that have grown very popular among the festival’s audience. Sergei Loznitsa will be presenting his fresh documentary Austerlitz that opened with favorable reviews at the Venice Film Festival this year depicting tourists visiting two of Germany’s  former concentration camps. His feature film My Joy (2010) was enjoyed by PÖFF’s audiences at jury alike as it was awarded with the Grand Prix.

Aother audience favourite who will visit the festival this year is Vitalyi Manskyi, who was awarded the Best Director award and the Special Jury Prize in 2015 for his documentary Under the Sun, a poetic study of life in North-Korea. The director presents his latest film Close relations that documents the life of Ukrainians under the difficult political circumstances.

The 20th Black Nights Film Festival takes place from 11 to 27 November in Tallinn and Tartu.

PÖFF’s programme will be released gradually from 11 October to 3 November.

Tweet
More in this category: « What´s Slovak in Warsaw (October 7 – 16) Bratislava IFF: The World According to Europe’s Leading Modern Filmmakers »
back to top