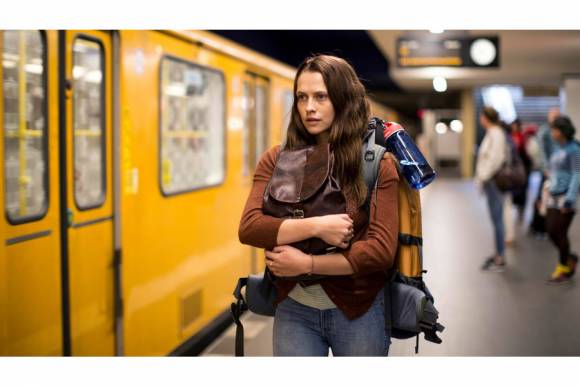 The 17th edition of goEast - Festival of Central and Eastern European Film will kick off with a screening of MY HAPPY FAMILY (CHEMI BEDNIERI OJAKHI, Germany, France, Georgia, 2017) on Wednesday, April 26th. The film, made by Georgian-German directorial duo Nana & Simon (Nana Ekvtimishvili and Simon Gross), sheds light on family structures and role patterns as seen from the perspective of 52-year-old protagonist Manana. Nana & Simon won the Award for Best Film in 2013 at goEast for IN BLOM.

MY HAPPY FAMILY is one of 16 entries to the goEast Competition, which includes ten fiction features and six documentaries; 13 of the films will be celebrating their German premieres at the festival, which takes place from April 26th to May 2nd in Wiesbaden and the surrounding area. The productions featured in the Competition are vying for four awards: the Golden Lily for Best Film (worth 10,000 euros), the Award of the City of Wiesbaden for Best Director (7,500 euros) and the Award of the Federal Foreign Office for Cultural Diversity (4,000 euros). The award winners will be determined by a five-member international jury, consisting this year of Latvian director Laila Pakalnina (chairperson), producer Maxim Tuula (Estonia/Russia), producer Sam Taylor (Great Britain), actor Jakob Diehl (Germany) and director Igor Drljača (Bosnia and Herzegovina/Canada).

A separate jury representing FIPRESCI will present the International Film Critic's Awards - this year the FIPRESCI jury will be bestowing an Award for Best Documentary Film for the first time in addition to the traditional Award for Best Fiction Feature.

The complete festival program now is available online at www.filmfestival-goeast.de/en/program.

The Films of the Competition

The Caucasus will not only be making an appearance in the opening film - the documentary film CITY OF THE SUN (MZIS QALAQI, Georgia, USA, Qatar, Holland, 2017, directed by Rati Oneli) is also set in the region: the film paints a portrait of the few remaining inhabitants of the Western Georgian mining settlement of Chiatura, which is well on its way to becoming a modern ghost town. In A FATHER'S WILL (ATANYN KEREEZI, Kyrgyzstan, 2016, directed by Bakyt Mukul and Dastan Zhapar uulu) Azat rediscovers his native Central Asian homeland, as he returns to the Kyrgyz highlands after a 15-year absence in order to fulfil his deceased father's final wish.

In EXILED (PELNU SANATORIJA, 2016), a Latvian-Lithuanian co-production directed by Dāvis Sīmanis, Ulrich Matthes plays a German surgeon who encounters a sealed-off universe inhabited by shell-shocked patients in a Latvian hospital in the final year of the First World War. Matthes is expected to attend the film's German premiere in Wiesbaden on Sunday, April 30th, at 8:30 pm at Caligari FilmBühne.

Representing South-Eastern Europe this year: Hana Jušić's virtuoso fiction feature debut QUIT STARING AT MY PLATE (NE GLEDAJ MI U PIJAT, Croatia, 2016), a coming-of-age story that can also be read as a critique of the patriarchy; the poetic, essayistic documentary film ISLANDS OF FORGOTTEN CINEMAS (KINO OTOK, Croatia, 2016, directed by Ivan Ramljak) about the nearly forgotten history of the cinemas that once dotted the Dalmatian Islands; and REQUIEM FOR MRS. J. (REKVIJEM ZA GOSPOĐU J., Serbia, Bulgaria, Macedonia, 2017), a deft mix of copious black humour and social criticism directed by Bojan Vuletić, whose debut film PRACTICAL GUIDE TO BELGRADE WITH SINGING AND CRYING celebrated its international premiere at goEast 2013. Leading actress of the film Mirjana Karanović is also expected to attend the festival, where she will be presenting her own directorial debut in the goEast Gurus festival section.

Director Adrian Sitaru is also no stranger to goEast. His latest fiction feature THE FIXER(FIXEUR, Romania, France, 2016) follows Radu, a news agency employee supporting foreign journalists in their efforts on the ground in Bucharest and beyond who finds himself painfully confronted with fundamental ethical questions regarding the nature of his work.

THE CITIZEN (AZ ÁLLAMPOLGÁR, Hungary, 2016, directed by Roland Vranik) on the other hand is at once a humorously differentiated genre picture of Hungarian society and an unusual love story between African immigrant Wilson and his married tutor Maria.

Germany's immediate neighbours to the East are also well represented in the festival's Competition section: THE SUN, THE SUN BLINDED ME (SŁOŃCE, TO SŁOŃCE MNIE OŚLEPIŁO, Poland, Switzerland, 2016, directed by Anka and Wilhelm Sasnal), an up-to-the-minute political adaptation of Camus' The Stranger; the documentary film YOU HAVE NO IDEA HOW MUCH I LOVE YOU (NAWET NIE WIESZ JAK BARDZO CIĘ KOCHAM, Poland, 2016), in which celebrated filmmaker Paweł Łoziński observes intimate therapy sessions between Hania and her mother Ewa; the drama and fiction feature debut FILTHY (ŠPINA, Czech Republic/Slovak Republic, 2017, directed by Tereza Nvotová), which mounts a devastating critique of the treatment of mentally ill individuals in Slovakia; THE TEACHER (UČITEĽKA, Slovak Republic, Czech Republic, 2016, directed by Jan Hřebejk), a dramedy set in Bratislava during the last years of the communist era which deals with an abuse of power at a middle school and its subsequent investigation; and finally TEACHING WAR (VÝCHOVA K VÁLCE, Czech Republic, 2016, directed by Adéla Komrzý), which documents how certain Czechs are preparing for a potential war by attempting to re-introduce military training to the school curriculum.

TEACHING WAR will be shown as part of a double feature, together with the Russian documentary film ALL ROADS LEAD TO AFRIN (VSE DOROGI VEDUT V AFRIN, Russia, 2016), in which young Muscovite filmmaker Arina Adju pays a visit to her father in Afrin, Syria, where he has started a new family and now must worry about their immediate safety in light of the looming threat represented by ISIS. The Competition selection is completed by the second Russian documentary film in the section, RUSSIA AS A PHANTASMA (ROSSIYA KAK SON, Russia, 2016, directed by Andrey Silvestrov and Daniil Zinchenko), which paints a provincial portrait encompassing the whole of Russia, with all of its laconic charm, surrealness and brutality.

Tweet
More in this category: « Finále Plzeň will turn 30 in April, and will launch the celebration with Jan Hřebejk’s film Garden Store: A Family Friend Meeting Point – Vilnius: The complete list of upcoming films from the Baltics and beyond »
back to top