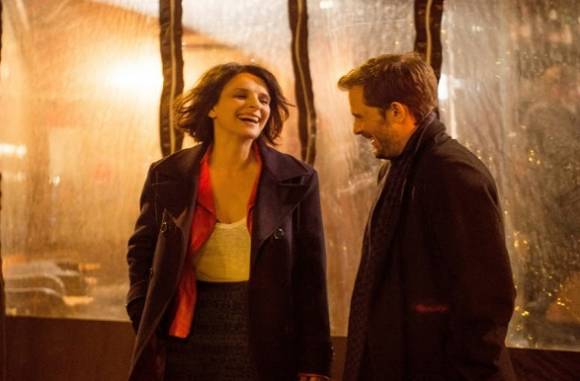 New films by Wim Wenders, Tony Gatlif, Yorgos Lanthimos and many more will be shown at the 33rd Warsaw Film Festival.

Djam, a young Greek woman, goes to Istanbul. In the city she meets a young French female, broke and lost, who came to Istanbul to work as a humanitarian volunteer. They set off together from Istanbul to Mytilene on the Greek island of Lesbos. It will be a journey made of music, freedom and hope.

James is an engineer, Danielle is a deep-sea researcher. They meet by accident at a hotel on France's northern coast, where both are getting ready for dangerous missions that lie ahead. Based on the novel by former war correspondent J.M. Ledgard, this is a love story about young people striving to be together although separated by oceans, continents, and civil war.

Steven has formed a friendship with Martin, a fatherless 16-year-old boy whom he has taken under his wings. One day Steven introduces the boy to his family. Things take a sinister turn, gradually throwing their perfect world into turmoil and forcing Steven to make a shocking sacrifice or run the risk of losing everything.

One of the world’s greatest fashion houses – Yves Saint Laurent – is famous for designs that for years have ruled people’s imaginations. The outfits made there are the result of creative genius, talent and hard work, but the drawings of YSL himself have always been fundamental to them. Now, thousands of sketches have been extracted from the vast archive of the foundation of Pierre Bergé for an in-depth analysis.

All the relationships, as time passes they become mundane. With so many opportunities available, can two people sustain a fulfilling relationship, or will they flounder in a sea of too many options? Millennials navigating a social media-driven hook-up culture begin a relationship that pushes both emotional and physical boundaries.

A major summit of Latin American presidents is taking place in Chile amidst the snowy grandeur of the Andes. The new president of Argentina will have to face up to serious challenges that could change his political future forever. Will he take part in a political revolt against the region’s uncrowned king, the Brazilian leader?

The third film in the “Outrage” series begins five years after the all-out war between the Sanno and Hanabishi yakuza families. The defeated Sanno soldiers have been absorbed by a new organization. The Hanabishi clan want to form a single, centralized, efficient crime state.

Nico, a German model of legendary beauty, actress, singer, Andy Warhol’s muse, she sang with the cult band Velvet Underground in the 1960s. Her manager persuades her to do a European tour. It isherlast opportunity to settle accounts with her muddled life and a chance to rebuild a relationship with the son she hasn’t seen in a long time.

Phuoc’sattentionisdrawn to his boss’s beautiful daughter, Chu but it turns out that the girl also shows affection to Mien, another restaurant employee. Jealousy and violence between Mien and Phuoc take place in their little love triangle. The story of a difficult path to find happiness and meaning against the background of Vietnam’s multicultural and multiethnic society.

A small town in Southern California is populated by many women and just a few men. Theories about their whereabouts abound, but the kids, still waiting for their return, say their fathers have gone to the moon. One dayitalsohappens to 15-year-old Michael.

One day a woman receives a parcel she sent to her incarcerated husband, marked "return to sender". Shocked and confused, the woman has no choice but to travel to the prison in search of an explanation.

Malena receives a call that will change her life: the baby she adopted is about to be born. Malena sets out from Buenos Aires to provincial Argentina to be present at the birth.

Attila Ambrus was a legendary Hungarian bank robber in the nineties. A Transylvanian, Ambrus grew up in Ceausescu’s Romania and the hopeless situation there made him later flee over the border in search of a better future. But even as an adult, many of his childhood problems continued – only now in Hungary.

When Olga’s mother, who lives in Hungary, unexpectedly falls into a coma, Olga returns to her native country. She finds out about secrets and lies buried in her family’s past. Olga finds a mysterious photograph taken many years before, which drives her to go on a journey into the past…

Mona, a Lebanese well connected woman, gave secret information. Now she is wanted and the Mossad helps by financing plastic surgery for her new identity and hiding her in a Mossad safehouse in Hamburg. Until then, she is protected by Naomi, a troubled agent.

Footage of refugees in sinking boats, and of a tiny child lying dead on a beach, impelled the 80-year-old actress to step behind the camera for the first time. Redgrave starts from the post-WWII era, when the world adopted the Universal Declaration of Human Rights. A very personal documentary on the current global refugee crisis.

In the autumn of 1977 NASA launched the twin Voyager probes into space. Theyarestill out there, beyond the solar system. The documentary reminds us about one of the greatest projects in human history, presenting the people whose unlimited imagination led to the development of the Voyager programme.

Breaking news… According to a report that has just come in, the unidentified flying object shot down over Moscow is allegedly of extra-terrestrial origin. Stunning special effects, plenty of humour, a riveting plot and the fate of humanity in the hands of teenage Yulya, the daughter of the colonel in command of the defence operation.

Winnie Mandela is one of the most misunderstood and intriguingly powerful contemporary female political figures. When her husband Nelson Mandela was sentenced, she joined in the struggle against apartheid, taking uncompromising steps. And while Nelson was remembered as a hero, Winnie was demonized in the global media.

When in 2014 the Islamic State took over the Syrian city of Raqqa as their capital, anonymous Syrians decided to fight against the terrorists with cameras and telephones. They also take part in a media war with the Islamic State's professionally prepared propaganda materials, believing that the truth shown to the world is the most effective weapon.

Nico, a well-known actor from  Argentina, decides to go to New York and find success on his own. Once he getsthere, it turns out he's too blond to play a Latino while his accent is too strong to play anything else. He needs to juggle bartending and babysitting to keep himself afloat…

Darling is a world-famous Danish balerina and she will dance the title role in the classical ballet "Giselle" with Frans as choreographer. One dayduringrehearsal, Darling collapses in pain. But Darling refuses to let go and she starts working with a young ballerina, Polly, who is to replace her.

Present-day Bulgaria remains optimistic, mainly because all the realists and pessimists have left. We drivethrough the streets of Sofia and look through the eyes of drivers and clients. We hear their stories that have happened in the span of 24 hours.

Isabelle lives in Paris. She is a divorced single mother, she wants to find the one and only true love, love forever, although she doesn’t really seem to believe in it. She meets a new man and goes through an array of emotional states: from joy and hope to confusion and sadness

A love story seen through the eye of a spider drone traversing a Middle Eastern desert. Gordon works for a companythatmonitors a pipeline in the desert. One day the spider drone encounters a girl and Gordon makes contact with her.

In 1982 Amos Gitai made the controversial documentary “Field Diary”, a chronicle of negotiations between the Palestinians and Israelis. Today he returns to the territories occupied for the past 50 years to describe the efforts of citizens, Israelis and Palestinians, who are trying to overcome the consequences.

Sri Lanka 1983, Jude Ratnam is five years old. On a red train, he flees the massacre of the Tamils instigated by the pro-Sinhalese majoritarian government. Now Jude Ratnam is a filmmaker and takes the same train from South to North. For the first time, a Tamil documentary filmmaker living in Sri Lanka is seeing the civil war from the inside.

Last modified on 2017-09-22
Tweet
More in this category: « Meeting Point – Vilnius: The complete list of upcoming films from the Baltics and beyond The winners of the 22nd Vilnius Film Festival are announced »
back to top