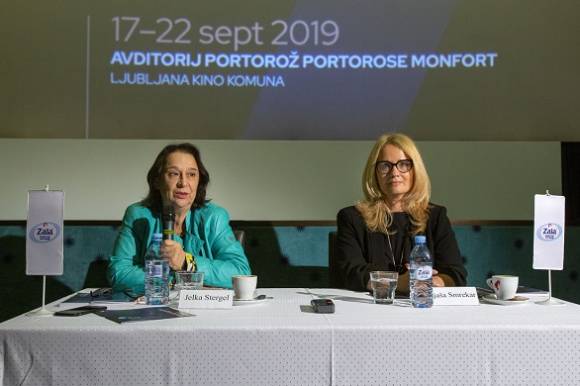 This year's edition of the Festival of Slovenian Film runs from 17 to 22 September 2019 in Portorož, with screenings and events taking place in two venues: Avditorij Portorož and Monfort Cinema. After the festival, between Tuesday, 24 September, and Saturday, 28 September, the award-winning films will also be screened in the Komuna Cinema, Ljubljana. The line-up will be announced after the awards ceremony on 22 September. As already revealed, the 2019 Badjura Award goes to the filmmaker and sound composer Andrej Zdravič. To pay tribute to the laureate, the festival is showing a selection of 14 of his experimental works.

At the 22nd FSF press conference, the Festival Director Jelka Stergel outlined the structure of the line-up, emphasising the large share of world premieres. In terms of subject matter, “compared with last year, there has been an apparent shift from social drama to drama that is more political, verging even on political thriller”. Minority co-productions are represented very strongly in this edition, “which suggests that Slovenian producers are good at recognising films that deserve financial and creative support”. In the light of this trend, Stergel highlighted the industry programme as an increasingly vital pillar of the festival, its aim being to set up a platform for filmmakers to exchange their knowledge and experience and seek international partners for their ongoing or future projects.

The industry programme will span five days from Wednesday, 18 September, to Sunday, 22 September. Its main event is the Coproduction Meeting (CPRM) – In Focus: Italy, with a rundown of Italian institutions making up the funding network for film production and cultural exchange (MiBAC, ANICA, regional funds, the Italian Cultural Institute in Ljubljana, the Italian Trade Agency in Slovenia) and pitching sessions for selected projects in development and postproduction to further facilitate and promote co-productions between the two countries, after endeavours in the recent years have already started to bear fruit. The programme also features a series of workshops, lectures, and debates. Among these other events, Stergel drew attention to a pitching event organised in collaboration with the Slovenian Book Agency, in which editors and publishers will pitch, to an audience of film producers, notable literary works that lend themselves perfectly to adaptation for the screen. Inspired by Cannes’ Shoot the Book! and Berlin’s Books at Berlinale, the aim of the event is to encourage adaptations of books by Slovenian authors for the screen, and to join the efforts for 2022, when Slovenia is the guest of honour at the Frankfurt Book Fair.

The festival will open with the premiere screening of Metod Pevec’ new feature I Am Frank. The host of the opening is Jure Longyka. Featuring an appearance by the popular local singer-songwriter Rudi Bučar, the ceremony will be followed by a reception in the Avditorij foyer.

The organisational aspects of the festival were presented by the 22nd FSF Project Manager Tjaša Smrekar. The screenings will take place in two venues, Avditorij Portorož and Monfort Cinema, connected by a minibus service. The Monfort Cinema is also the venue for daily post-screening socialising with a varied live-music line-up. Admission to Monfort screenings starting before 5 pm is free, subject to capacity, while tickets are required for screenings after 5 pm. Evening events are open to visitors with a festival pass or a ticket for any festival screening.

The festival will close on Sunday, 22 September at 19:30 with the awards ceremony hosted by three actors from last year’s award-winning film Consequences. Unlike previous years, the event will be broadcast live on TV Slovenia.

Over a little less than a week, the main Slovenian film event will provide a curated overview of the latest Slovenian cinema, which includes fiction, documentary and animated films of all lengths. A total of 157 films were submitted to the festival for consideration by the Programming Board, with 106 films making it into the official selection. Of this, the Official Competition includes 57 films: 11 feature-length films, 10 minority co-productions (8 feature-length and 2 short), 5 medium-length films, 19 short films, and 13 student films.