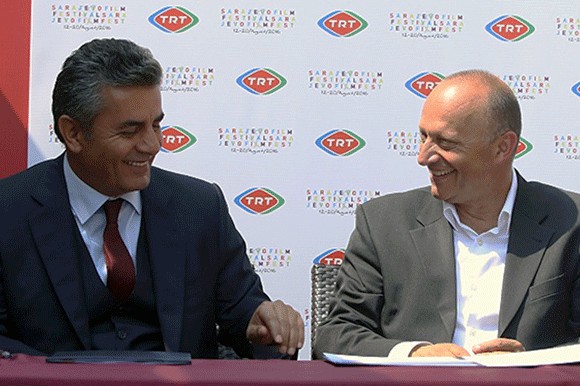 SARAJEVO:  An agreement signed on the last day of the 22nd Sarajevo Film Festival (12-20 August 2016) will allow the Turkish Radio Television (TRT) to support at least one project from ex-Yugoslavia with the amount of 200,000 EUR in cash, 35,000 EUR in in-kind postproduction support and 35,000 EUR in producers’ fees.

“This pilot edition of SCF GS gives filmmakers from our region the chance to have a film financed quickly, made within a year and seen by large audiences. It is a rare opportunity and we are excited to see the first results here next summer”, says Jovan Marjanović.

Eligible projects must have a director attached and producers must have one feature film credit to their name in the last four years. TRT will appoint a production company from Turkey that will act as the Turkish coproducer of the project.

The call for applications opens on 22 August and wraps on 4 November 2016.  Two projects selected for the next stage will be announced in December 2016 and will progress to the workshops that will be held in Sarajevo in mid-December 2016 and in Istanbul in late-March 2017. At least one of the projects will move into the production phase. The film is expected to be ready for presentation at Work in Progress at the Sarajevo Film Festival in 2017 and will also be ready for release by the end of 2017.

Sarajevo City of Film for Global Screen is building upon the experience of Sarajevo City of Film Fund, which supported the production of 25 short films and two feature films since 2008. It is a unique development, financing and production platform aimed at supporting the production of micro-budget films targeted at wider audiences from Bosnia and Herzegovina, Croatia, Kosovo, Macedonia, Montenegro, Serbia and Slovenia.

SCF GS will support the development process in full, supervise production and place the project in the international marketplace. Filmmakers will also be offered a carefully designed programme providing access to multi-level expertise and individual mentorship throughout the production process.