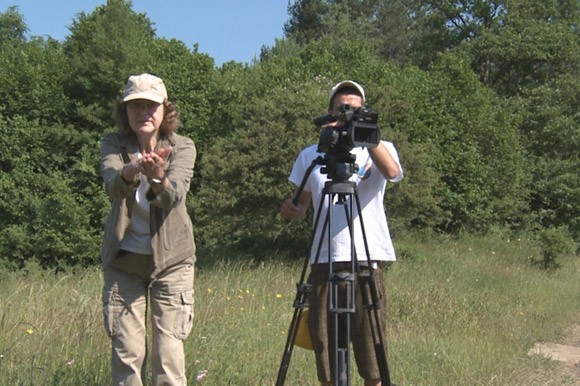 Adela Peeva - On the set

Inspired by the pilot’s decision to purposely crash his plane into an enemy bomber during WWII,Peeva uncovers unknown biographical pieces to build a multifaceted portrait of Spisarevski.

“He is certainly remembered as a hero, because he sacrificed his life in defence of Sofia, which at the time was attacked by American planes. But biography will only be the first side of the film. I want to focus on topics like the creation of myths and the ways history is written. I equally want to explore frenetic desires to have heroes at any cost,” Peeva told FNE.

The budget of the film is 100 000 EUR. Development and production were supported by the Media programme, the Bulgarian NFC, Bulgarian National Television BNT, and the Sofia municipality. Work on the film started three years ago, searching archives in Germany, U.S., Albania, Russia and Bulgaria. Also writer and producer Peeva, who wrote and produces the film, shot it with two DoP’s: Kaloyan Bojilov and Dimitar Skobelev. She is now editing with Kaloyan Nikolov.

In 2011 Peeva was one of the 20 prominent European filmmakers invited for the 20th anniversary of the MEDIA Programme celebrated during the Cannes IFF. Whose is This Song (50 international film festivals, 16 prizes) and Divorce Albanian style (30 international film festivals, 11 prizes) were nominated by the European Film Academy for Best European Documentary - Prix Arte, in 2003 and 2007 respectively.