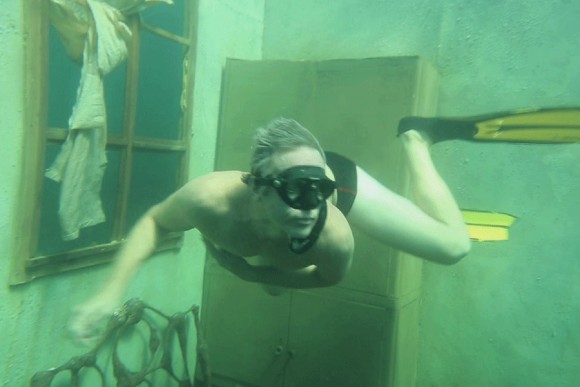 The Sinking of Sozopol by Kostadin Bonev

VARNA: Kostadin Bonev’s third feature film, The Sinking of Sozopol (aka A Town Named Salvation), is “a nostalgic utopia on missing hope, in which a sea engulfs a city“, as Bonev told FNE. The film screens in the main competition of the Varna Golden Rose Film Festival (11-17 October 2014).

Ina Valchanova and Kostadin Bonev penned the story about a man who returns to the small and charming Black Sea town of Sozopol, which he used to visit in his youth, believing that nostalgia and alcohol would help him rediscover his roots.

The film produced by Borough Film was supported with over 600,000 EUR by the National Film Center and received 15,000 EUR for resale to the Bulgarian National Television. The six-week shoot took place in late autumn of 2013.

Symbolically, the avant-premiere of the film took place in Sozopol during the annual Apollonia Festival of Arts on 29 August 2014.

For more information go to: http://www.zlatnaroza.bg/en/portfolio/the-sinking-of-sozopol/

+(359) 888 920 114
This email address is being protected from spambots. You need JavaScript enabled to view it.
www.boroughfilm.com