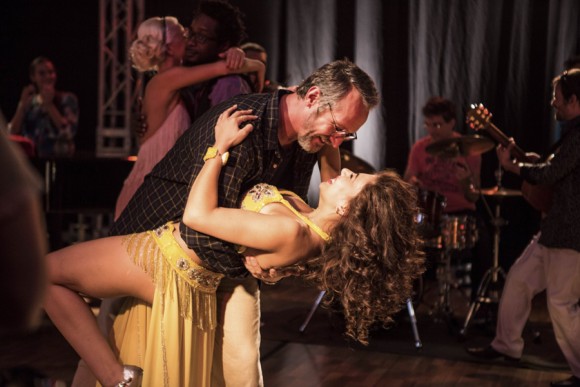 Deyan Donkov and Anya Pencheva in Off-Road by Nikolay Volev

SOFIA: Established director Nikolay Volev is in postproduction with Off-Road, a new feature film after a break of nearly fifteen years. The release is planned for 2017.

The story written by Nikolay Volev follows the spiritual crisis of a stage playwright, Stefan. Having lost his inspiration, he doubts his ability to continue writing. The only person who believes in his talent and supports him unconditionally is his wife, a talented stage actress herself. Torn between his love for art and the passion for high speed cars, Stefan finds temporary refuge in a relationship with a young gypsy girl. They often drive through difficult mountainous terrains in his jeep, which plays a key role in the story.

„The main idea came to me when I decided to leave my house at the Black Sea and move to the mountains. Near the town of Bansko I found true, unearthly beautiful landscapes. To my delight this area is still extremely pure”, Volev told the Bulgarian media.

He is also producing through his company Nikotea with the support of the Bulgarian National Film Center.

The film stars popular actors Anya Pencheva, Deyan Donkov and Kalin Sarmenov and also a non-professional actor Sali Ibrahim. Shooting took place mainly in the foothills of the massive peak Todorka in the Pirin Mountain and Sofia in August-September 2015.

Nikolay Volev previously directed several acclaimed films such as The Double (1980), King for a Day (1984), Dangerous Charm (1984) and Margarit and Margarita (1988), all of them produced by the ex-state owned Boyana Studios.

Production Information:
Nikotea
5 A, Krakrastr.
Sofia - 1504
Bulgaria
This email address is being protected from spambots. You need JavaScript enabled to view it.