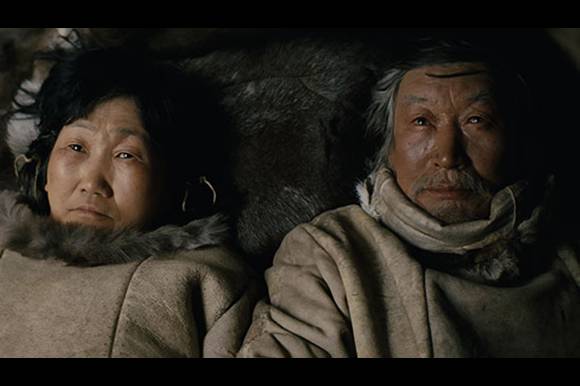 Shot in the Russian republic of  Sakha one of the coldest and most remote places on earth Lazarov captures a last look at the Inuit people whose way of life is as much at risk from the global warming that is destroying the beautiful frozen landscape around them as from the encroaching modern world that is drawing away young Innuit people to work in towns and factories leaving the native way of life behind.

Reindeer hunter Nanook played by Mikhail Aprosimov and his wife Sedna played by Feodosia Ivanova continue to live in the traditional Innuit way of life hunting and ice-fishing. Their daily life is hard, but they never complain. The beauty of their life as they tell each other the old legends and their dreams contrasts sharply with our ugly and rackety life filled with computerised devices and noise. As they describe imaginary encounters with animals, humans, the living or the dead, everything has its meaning and it points to the emptiness and shallowness of our own lives that grow ever more meaningless with thousands of Facebook friends only deepening the modern sense of loneliness.

The film lensed by Kaloyan Bozhilov uses wide shots over the vast and empty landscape to document this snow covered land that once was covered with reindeer and nomadic herders and now is melting in such a sad and dramatic way.  Shots of the vast hole in the ground that is the diamond mind inspire awe while the wide shots of the frozen plains and the trails of airplane jets in the sky remind us of the conflict between man and nature and the man-made disaster that we are inflicting on our planet.

Nanook and Sedna still live in a traditional yurt and have only one sled dog.  Ice-fishing yields less and less fish and the ice melts earlier every year.  Trapping a few small animals helps to sustain them but it is clear that this isolated couple will be one of the last to live the Innuit way of life.

Sedna is seriously ill and treats herself in traditional ways but she knows she is dying and is resigned to her fate. What she dreams of most of all is to be able to talk about the couple’s daughter Aga played by Galina Tikhonova who left home years ago giving up the traditional Innuit way of life to work in a nearby diamond mine.  But Nanook refuses to talk about Aga or forgive his daughter for whatever their unknown quarrel was about.

Lazarov has mixed a fictional fable with a documentary style that we can thank for capturing this vanishing way of life.  The choice of Nanook as the name of one of his main characters is an obvious reference to Robert Flaherty’s 1922 ethnographic documentary Nanook of the North that mixed documentary and fiction.

This is a love story that goes beyond any ordinary couple.  This is a passing away of not only a life, but a way of life and a whole part of our planet.  This is a fable filled with infinite sadness and beauty that should be seen by audiences everywhere.