FNE at Golden Rose National Film Festival 2018: Away From the Shore Featured 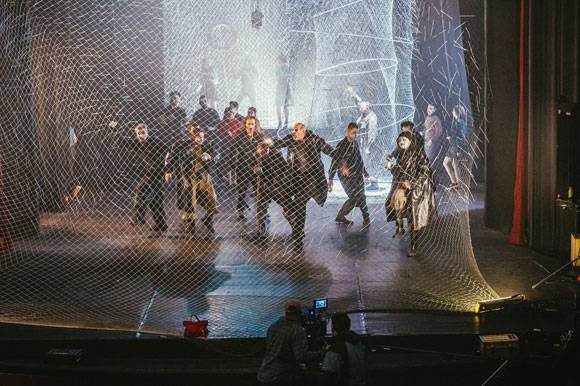 Away From the Shore by Kostadin Bonev

VARNA: Kostadin Bonev’s feature film Away From the Shore will screen in the main competition of the 36th Golden Rose National Film Festival (27 September - 4 October 2018). The Bulgarian/Ukrainian coproduction is a personal interpretation of the clash between creative people and censorship during the communism.

The script written by Nikola Petkov, Evgeni Kuzmanov and Kostadin Bonev tells the story of a talented theatre director expelled from the capital to a small provincial theatre. As human relations are under scrutiny of constant secret tracking and fear of betrayal, his sincere efforts to turn the theatre into a place of socially engaged art gradually lose sense.

“The plot has two levels: one is realistic and reflects the director’s and crew’s everyday life and the other is fictional and shows the theatrical performance of a ship spinning in the sea. In order to uncover the nightmares of the time and the importance of memories, I tried to bind two sources of energies so that the past, present and future become inseparable“, Bonev told FNE.

It was produced by Trivium Films in coproduction with Ukraine’s Odessa Film Studio with a budget of 810,500 EUR. The Bulgarian National Film Center supported the project.

The five week shoot took place mainly in the towns of Yambol, Bourgas and Sofia in the autumn of 2017.

The commercial premiere is planned for 2019.