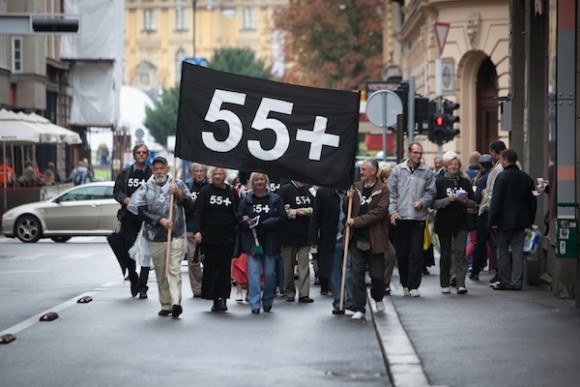 ZAGREB: Borut Šeparović is editing his first long documentary Consumed/Potrošeni, the last part of 55+, a complex project about people over 55 and their rejection by Croatian society.

This “educational, civil performance and socially engaged initiative,” as the director-producer puts it, was created by the artistic organization Montazstroj which gathered 44 people aiming to present them as active protagonists in the Croatian society.

Shooting took 27 days. It started on 7 May 2012 when the auditions began and ended on 10 October 2012 at the final 55+ party. Shooting covered the workshops the protagonists attended, group and individual interviews, protest actions, and a theatre performance.

The project is supported by the Ministry of Culture of Republic of Croatia, Zagreb City Office for Education, Culture and Sport, Zagreb City Office for Social Protection and People with Disabilities, Common Path Foundation, Croatian Audiovisual Center, and Open Society Institute, along with numerous cultural centers and institutions in Zagreb. From the overall cost of 90,000 EUR only 70,000 EUR were gathered, and more than 70 requests were declined. According to Šeparović, this indicates that “we are dealing with a neglected part of the society which is not the target group for the biggest companies in Croatia.”

The project is set to be finished in September 2013 with the premiere loosely set for June 2013. The film will have only a 90 minute version, with budget considerations eliminating a shorter version.