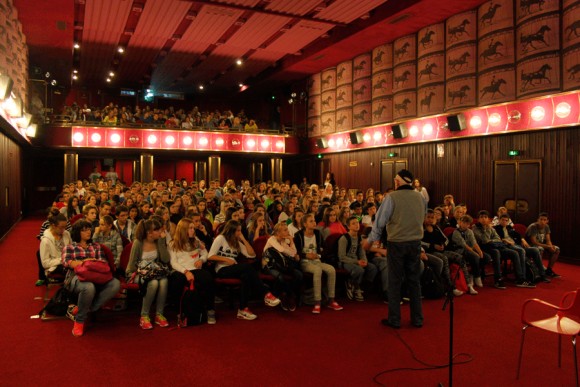 This month we speak to Slobodanka Miskovic, the director of Art-kino from Rijeka, Croatia. The Art-kino is a public institution founded by the City of Rijeka, which operates in the field of film art and culture.

The main activity of the facility takes place in the Art-kino Croatia situated in the most central part of Rijeka, where the first screenings were held in 1926.

Art-kino Croatia is a public space intended for screenings of high-quality contemporary and classic films, as well as for the development of film culture. The number of Art-Kino’s visitors has increased constantly and last year it exceeded 34,000 visits.

Slobodanka Miskovic: After small local cinemas disappeared from Croatia's cultural map and multiplexes opened in most of the major Croatian cities, opening an art house cinema and attracting an audience was a big challenge. Currently, the audience is constantly increasing and the greatest challenge of all is to find young audiences. Another challenge lies in collecting funds, and occasionally struggling with copyright distributors. We are very glad that the results show that we are dealing successfully with all of these challenges and creating an important point of reference for the community of filmmakers and film lovers.

Art-kino will continue to develop its programme and improve its organisational aspect in order to accomplish its social role. Art-kino Croatia refers to film as a medium that reflects social processes and personal dilemmas, as well as a direct tool in forming the individual and society.

FNE: What kind of films do you prefer to screen and why?

S. M.: We screen valuable films, numerous contemporary titles, but we are the happiest when we have the opportunity to screen domestic premieres. They show that film production is strengthening and that people are creating. Moreover, we are happy that audiences are very interested in these films.

The content of Art-kino’s programme is clearly defined and consists of a programme of both national and international heritage, as well as mainly independent European contemporary productions and educational content. It is the focal point of Rijeka’s film life, home to nearly all of the city’s film events, as well as host to almost all the Croatian leading film festivals whose profiles are varied, but always with strong artistic orientation.

In our basic programme we screen feature, animated, documentary, experimental, non-professional, short and long films. One of the institution’s tasks is a continuous cinema agenda to ensure the availability of films of particular historical interest and artistic value, therefore we often screen retrospectives dedicated to specific directors, actors, genres, topics, film trends...

A special emphasis is placed on contemporary European film production, often by organizing national cinematography festivals. Besides, the content takes into account experimental films, in particular artistic practices that question the barriers between film language and cinematic forms or connect the medium of film with other artistic media. Art-kino is a balanced combination of a cinematheque and an art house. It screens more than 600 titles yearly, hosts around 20 film festivals, manifestations, revues and author cycles, series of film premieres, debates, film book and magazine presentations and numerous analogous events related to the art of film. The film programme takes place in the Art-kino Croatia, the open-air Art-kino cinema (Summer Art-kino) and the Mini Art-kino.

The concept of our programme/content is based on artistic relevance, an awareness of the educational role of cultural institutions and their responsibility for the development of an integrated cultural field of work, and an openness towards the needs of the community.

S.M.: Hosting festivals from Zagreb and the rest of the world is part of a very important process of decentralisation from the Croatian cultural offer. Special events animate the audience, but what is most important is to encourage the dialogue, to create a space for interaction and exchange of opinions. Through festivals, debates, cinematheques and national cinematography cycles we are trying to create a diversified offer dynamic enough to keep the existing audience and boost the creation of a new one.

FNE: What is role of Europa Cinemas for cinemas such as your own and why is it important?

S.M.: Besides digitalisation, which is extremely significant for Art-kino, being a member of the Europa Cinemas network enables the development and education of the audience, an investment in future generations who still have to learn how to value the medium of film. Thanks to the support of Europa Cinemas, the Croatian Audiovisual Centre and Rijeka’s city government, we are able to work on what the school system lacks, which is not fully recognizing the medium of film and disregarding the problematic of the latter, even though it is the most widely present medium in everyday life. Moreover, Europa Cinemas encourages the screening of European films, which has an artistic rather than a commercial value, and is therefore crucial for our programme because it allows films to reach the audience.

S.M.: Art-kino introduces the community to valuable films, creating a place for interaction, education, dialogue, exchange of experiences, knowledge and opinions. It is also important that the film industry community has a space to present their work, to organise workshops, rehearsals and debates.

FNE: Can you  say something about your work with young audiences?

S. M.: Art-kino is trying to develop all aspects of film culture. We are trying to develop programmes for young audiences which might encourage them to watch, understand and produce films. We are continuously implementing several projects with the purpose of encouraging the interest of our children and young people towards film and introducing them to specific elements of film and media culture.

As an example of the latter we point out the School in the cinema project carried out in cooperation with Department for Culture in Rijeka and the Croatian Film Association. The programme was structured according to the guidelines of media culture in schools, and it is composed of carefully organised projections (an average of 80 per year) and introductory lectures regarding specific elements of film language.

Yearly, through the implementation of this programme, approximately 7,000 pupils visit Art-kino. The education of children and youngsters is at the same time an investment in a future audience and future filmmakers. In our regular screening programme we pay special attention to a high-quality selection of film titles of all genres for young audiences. Besides that, we have workshops to make optical toys, film posters, drawings of film characters and similar programs for additional motivation for our young audiences.

S. M.: The digitalisation of the cinema enabled us to keep up with modern trends in the film industry; without it we would not be able to screen such a large number of films. Besides that, the process of delivery and shipping of screening material is simpler and more economical than before. Most importantly the quality is much higher.

Our cinema took part in a National project of Croatian independent cinema digitalisation launched by the Ministry of Culture and the Croatian Audiovisual Centre (HAVC), and it was equipped with digital projectors. In that way the expansion of film culture in Croatia was strongly stimulated, and independent cinemas were given the opportunity to connect better, broaden their network and strenghten their position towards the distributors.