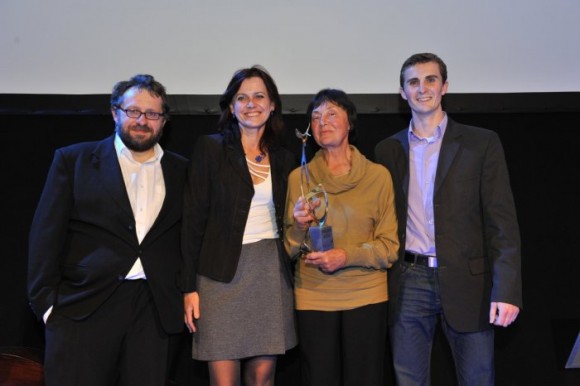 PLZEN: Festival director Ivan Jachim was unfortunately sidelined due to illness for the duration of the 26th Finale Plzen festival of Czech films which concluded on 27 April 2013.

He would have seen a newly energized festival with an enhanced industry programme and both critical and audience acclaim for a strong new generation of filmmakers.

The festival audiences voted In the Shadow, the Czech Lion winner directed by David Ondricek, as Best Feature Film, and the film also won the same award from the Association of Czech Film Clubs.

A sign of the strength of the competitions, awards were also dispersed among several films competing in the documentary section. Jury chair and German documentary director Hans-Erich Veit gave an emotionally charged speech in awarding the Golden Kingfisher for Best Documentary Film to Vera 68 directed by Olga Sommerova and representing a second win for production company Evolution Film. The win for the story of the record-holding seven-time Olympic gold winner Vera Caslavska, who was forced to retire from sports after protesting the 1968 Soviet invasion of Czechoslovakia, was greeted with a standing ovation. Veit recalled hearing of her courage in 1968, while he was a student. “It’s a great honor for me to meet this Czech miracle woman,” he said.

The jury awarded a special mention to Dagmar Smrzova’s story of a schizophrenic man, The Question of Mr. Love produced by endorfilm. The films also won the Best Documentary award of the student jury.

The Association of Czech Film Clubs gave its Best Documentary award to Outraged 2012 directed by David Vondracek and produced by Czech Television. The Most Original Documentary by a Filmmaker under 35 went to the Czech-Slovak film The Greatest Wish directed by Olga Spatova. The Best Documentary by a Filmmaker under 35 went to Vit Klusak, co-director (along with Filip Remunda) of Life and Death in Trnvald produced by their company Hypermarket Film. The two young filmmakers were also the subject of a festival retrospective.

The 2013 festival was notable for a growing industry programme headed up by Eva Safrankova. Along with the annual pitching forum of upcoming Czech films, the schedule included a meeting of regional film funds, and presentations by Czech Television on its new programming department structure and by the State Fund for Cinematography on the changes in the film funding programme. A focus on Germany included film screenings, a meeting between Czech and German state broadcasters, and a networking platform for Czech and German filmmakers and industry representatives.