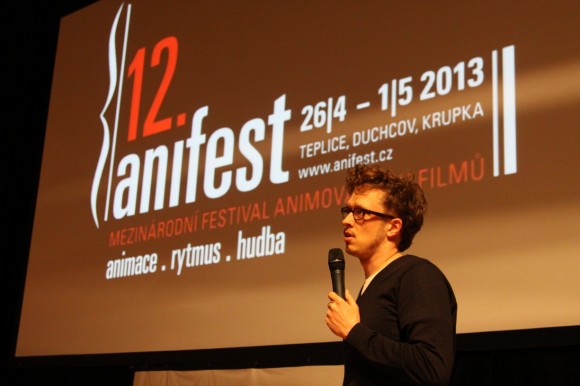 TEPLICE: The main jury of the 12th edition of Anifest which closed on 1 May 2013 chose not to award a prize in the Best Animated Feature Film category. Jury members told FNE it was “an ethical decision.”

That the festival took place at all this year was a triumph of sorts. Festival director Jakub Hora resigned just three months before the festival was to begin, and new director Petr Splichal came on board less than two months ago.

Splichal, a line producer and director, told FNE he was working with a reduced budget and a smaller team. About half the former team stayed on for the 2013 festival. He was hopeful about continuing as director of the 2014 festival, noting that work on it would have to start immediately. However, he heads to South Bohemia now to begin working on a new Nova TV series set there.

CEE films were largely left out of the awards, with the exception of the Hungarian short student film Rabbit and Deer directed by Peter Vacz, which won the Audience Award, and the Croatian experimental short Pinball directed by Darko Vidackovic, which received a special mention.

Belgium took home the Grand Prix for Oh Willy… and a best short film, 15-60 minutes, for the coproduction Junkyard. The U.K. picked up the Best TV Film and Series prize for Room on the Broom and the Best Short under 5 minutes prize for LOVE OLYMPICS: Fencing. The Best Short film 5-15 minutes went to the Iranian film Tunnel.