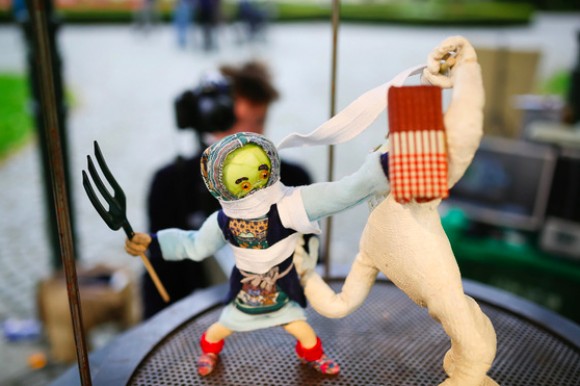 TREBON: Animation could be the key to launching regional TV series coproductions, TV station executives told a packed room of producers and animators at the first Visegrad Animation Forum, taking place during the 4th edition of Anifilm running through 8 May 2013.

The participants, representing public broadcasters in Poland, Croatia, Slovenia and Slovakia, were addressing the question of coproduction of TV series, and animated series in particular. While funding for TV-produced animation varied widely between the stations, as TVP’s deputy head of film Anna Kowalewska-Onaszkiewicz said, “We have no better way than coproduction. It happened in drama, it happened in documentary, so why not animation. Now is the time.”

CTV's director of programme development Jan Maxa told the audience that animation avoids the problems such as location and cast that can derail live action coproductions. “There is a fairly limited scope for coproduction. Culturally, linguistically, we are quite different,” Maxa said.

However, the difference can be overcome in animation. “Animation is one of the best possible ways to find foreign partners,” CTV director Petr Dvorak told FNE. “You can build your own stars.” CTV is looking beyond traditional children’s animation. Dvorak said CTV wants to coproduce an animated feature film and is even looking at a half-hour animated series aimed at an adult audience.

Both CTV and TVP are likely to see increased space for animation, as the two public broadcasters prepare launches of their own children’s channels in fall 2013. Petr Koliha, the head of the new station, CTVD which begins broadcasting on 31 August 2013, said there is room for original programming on the new channel and that he’s now looking for a range of genres. TVP on the other hand licenses shows instead of producing in-house.

For most of the stations in CEE, a cornerstone of animation is the bedtime series format, usually in the range of a film of around seven minutes suitable for pre-school and primary school children. Slovak TV  script editor Halka Marcekova said that although a children’s station was only a dream in Slovakia, the public broadcaster was expected to renew its cooperation with Czech TV on the animated bedtime series.

Public stations in Croatia and Slovenia were restrained by budgets. Andraz Poeschl, head of the Culture and Arts Programme of RTV SLO  said the funds for cultural production had been cut in half over the past five years. Kresimir Zubcic, Croatian TV said, “There’s a strong wind from local filmmakers who want the TV to come in as a coproducer and with money.” He noted, “There’s no reasonable explanation why we are no longer producing animation,” but added, “I don’t think we are going to coproduce this year. It’s a matter of money.” Dvorak noted, “Money and the length of production time was a hindrance in the past.”

Still, all the participants were optimistic about the prospect of international animation coproduction in the near future. As Maxa said, “Animation has big international potential.”