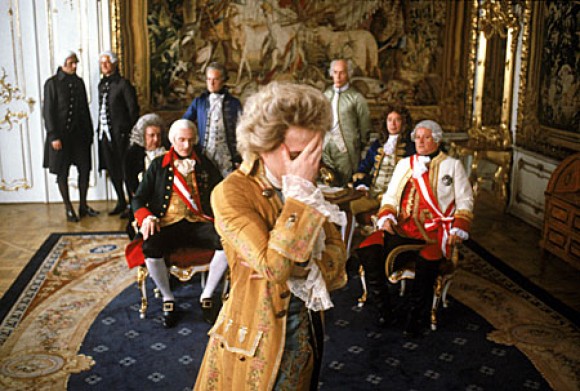 ZLIN: A decade before the great glut of foreign productions descended on Prague in the 1990’s there was Amadeus. Now, 30 years after the making of the film, Czechs are remembering when Hollywood came to Czechoslovakia with a surprise film of their own.

Czech émigré director Milos Forman and a Czech-American team lead by Oscar winning costume designer Theodor Pistek and Oscar nominated cinematographer Miroslav Ondricek tantalized international audiences with sumptuous images from the Iron Curtained country. Meanwhile, an amateur local filmmaker was lifting the curtain for a small peek behind the scenes of the making of Amadeus.

Ladislav Frantis, a factory technician, sneaked onto the set during filming at the castle of Kromeriz, spending one busy hour shooting short glimpses of the cast and crew. Frantis told FNE that except for his family and a few friends – other amateur filmmakers – the film has never been seen since he made it in the summer of 1983. That’s about to change. Amadeus at Kromeriz, the rare, secretly filmed documentary, will have its first public screening on 29 June 2013 at the Vivat Amadeus festival being held in the picturesque town of Kromeriz. Public broadcaster Czech TV will show the film on 6 July.

Frantis spoke with FNE at the Zlin IFF for Children and Youth during an intimate special press screening, about his experience in making the film. “I just walked past the barriers onto the set. My camera was very small, 8 mm, so no one bothered me,” he said. “Film was very expensive, so I could shoot only ten seconds at a time. The sound strip was very small, so the sound quality is not good.” The grainy end result has a grab-and-run quality, with shots cut off as soon as an actor or crew member catches Frantis filming.

Forman and Ondricek, along with Pistek’s costumes, are the “stars” of this short film. Frantis is hopeful it will somehow make its way to the director. “I would very much like Milos Forman to see it,” he confided.