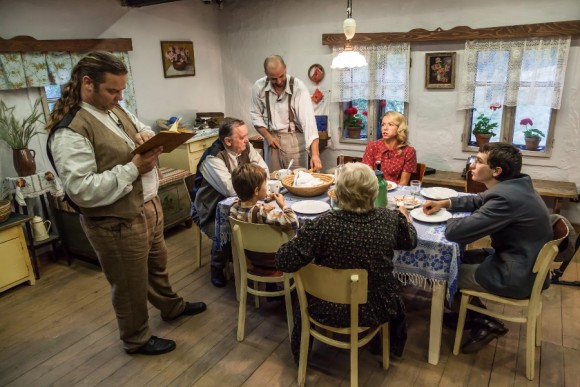 A Vacation in the Protectorate credit: Czech TV

PRAGUE: A Vacation in the Protectorate, a new docu-reality show which places its participants in a Nazi-occupation type of setting premiered on Czech TV 23 May 2015.

The series from one of Czech TV’s regional branches, Czech TV – studio Ostrava, unfolds over eight episodes filmed in two months and brings the protagonists back to the times during the Nazi occupation, known as Protectorate Böhmen und Mähren (1939-1945). The project was inspired by similar foreign formats like Germany’s Schwarzwaldhaus 1902 or Wartime Farm in the UK.

The aim of the show is to find out whether a contemporary Czech family is able to hold up in the situations their grandparents had to experience.

A farm in the Moravian village of Stare Hamry was rebuilt into a homestead from the era of some 70 years earlier. A three generation family, chosen from 400 applicants, was brought back in time to March 15, 1939 and filmed as its seven members were forced to confront everyday realities of the occupation, such as hunger, persecution and Gestapo raids. The series was filmed under the supervision of historians and architect who guaranteed the authenticity of the details.