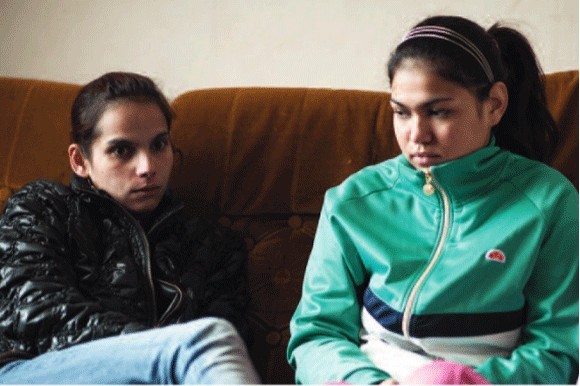 The Way Out by Petr Vaclav

It has been a busy year for Czech cinema. Karlovy Vary International Film Festival celebrated its 50th anniversary in 2015, Czech films were invited to many international festivals and many of the brought home awards, talented new filmmakers emerged.

The Way Out by Petr Václav received seven Czech Lions and the Czech Critic´s Award for Best Film, Home Care by Slávek Horák was awarded at KVIFF and selected as the Czech submission for the Academy Award for Best Foreign Language Film.

Twenty eight feature films and 15 long documentaries premiered in the Czech Republic in 2015. Slovakia remains the main coproduction partner, however in recent years the Czech Republic has coproduced with other countries as well, including Poland, Romania, Georgia, Slovenia and even Iran. Some of these coproductions were successful at international film festivals (Aferim!, Family Film, Corn Island, Siska Deluxe, etc).

Other big projects were: a Chinese TV series Last Visa, directed by Quing Hua and produced by Onmijoi Group and Prague-based company Twin Star Film, Unlocked by Michael Apted produced by Bloom with Czech-Anglo Productions and Anthropoid by Sean Ellis, produced by LD Entertainment with Lucky Man Films, which were also supported by the tax incentives programme of the State Cinematography Fund.

There are 33 distribution companies on the market, but only the top ten have a market share of over 1%. Cinemart, the leading distributor of US films, representing Twentieth Century Fox, Universal and Paramount Pictures,has the biggest share, 29.5%, and the highest number of releases, more than 50 per year.

Cinemart is followed by Falcon with 21.3 %. Falcon is the distributor and coproducer of high-profile Czech films, considerably contributing to the high attendance for domestic films in the Czech Republic. Number three in 2014, Warner Bros. Entertainment (16.4%), closed its activities in the Czech Republic and passed its business to Freeman Entertainment (http://www.freeman-ent.cz/klient-84/kino-78/stranka-1963), which also handles the distribution for Lionsgate, Summit Entertainment and DreamWorks.

With 9.9% Bontonfilm mostly handles domestic and art house titles. Bioscoop/AQS holds the fifth position with 7.1%. Twenty seven cinemas are members of the Europa Cinemas network and are entitled to use the MEDIA programme’s support for distribution of European films.

Some Czech distributors are using day-and-date releases and VOD platforms for European arthouse titles on a regular basis. The most active distributor in this area is Film Distribution Artcam.

For the last three years cinema attendance in the Czech Republic has been quite stable with over 11 m admissions annually and trending toward a slight increase. The average ticket price in Czech cinemas is 4.68 EUR /126, 54 CZK.

The biggest market share, 56%, belongs to US films, while European titles reach a 12% share. Compared to the past, Czech films have been losing the enviable position they used to have on the market and their share has declined to 22%.

Seven Czech films were in the top 20 in terms of admissions in 2014, including the winner Three Brothers, Zdeněk Troška’s Babovřesky (Fenix Film) in the 6th position with almost 246,000 admissions, followed by Jiří Vejdělek’s Tender Waves / Něžné vlny produced by Tomáš Hoffmann with 245,000 admissions, both distributed by Falcon.

A total of 30 multiplexes with 229 screens and 41,116 seats were operating in the Czech Republic in 2015. Multiplex theatres´ market share at the box office was 73.95% in 2014. The largest multiplex theatre operator is Cinema City, followed by Cine Star.

Czech Republic’s State Cinematography Fund has been the main tool for public support for cinematography in the Czech Republic since 1992. After the adoption of the new Cinematography Act in 2013, the Fund became an independent institution with its own director, new financial structure and a Council for assessing and deciding on individual requests for state support.

Since the introduction of the new law in 2013, the State Cinematography Fund has also administered the Czech incentives scheme, which has been effective since 2010. The incentives are granted in the form of a 20% cash rebate on Czech production costs and 10% of nonresident labour costs that are subject to Czech withholding tax. The incentives are available for feature films, TV series, animation and documentary films. Rebates are issued at the end of production in the Czech Republic upon submission of audited statements of costs incurred and paid out in the form of cash grants.

In 2016 and 2017 an improved incentives scheme will be gradually introduced as the Czech government implements some important changes which will make the system more flexible for film productions. The rebate will no longer be subject to a yearly cap. Producers will be able to register at any time during the year and immediately receive a registration certificate that guarantees payment of the rebate upon fulfillment of all conditions. Rebates will be allocated throughout the year, depending on the beginning of production, and producers will be able to receive their grants in two parts, first upon completion of filming in the Czech Republic and the second part after the completion of all Czech production.

The National Film Archive handles both domestic and international sales of films made in Czechoslovakia before 1991 and produced by Barrandov and Zlin film studios (both state owned at the time). Czech Film Center is in charge of the promotion of Czech films abroad and it is the official national representative of Czech cinema and film industry at key film festivals and markets. Czech Film Commission is the official film office supporting and promoting audiovisual production in the Czech Republic. Together with Creative Europe – MEDIA Czech Republic, they are since 2013 a part of the National Film Archive.

There are four major TV groups in the Czech Republic: public TV Czech Television with 29.43% market share, privately owned NOVA group with 27.83%, Prima group with 23.72% and Barrandov TV with 5.8%.

TV stations also increased the number of programmes available on the internet, bringing them to a larger audience. TV NOVA has its video library Voyo.cz, Prima group runs PrimaPlay.cz , while the Czech TV offers its programmes via iVysílání.cz.

Television stations play a large role in the production of quality content for local film and TV. Czech TV has become a permanent partner of Czech filmmaking, with its in-house production sector Film Center coproducing many feature films, including Lost in Munich produced by Lucky Man Films, Home Care by Slávek Horák or Journey to Rome by Tomasz Mielnik (Background Films).

Czech TV is also the coproducer of almost all documentaries released in cinemas. Among the most interesting titles of 2015 are Helena Třeštíková’s Mallory (Negativ) and Andrea Sedláčková’s Life according to Vaclav Havel (a coproduction between Czech TV, ARTE and Negativ).

HBO Europe also coproduces Czech documentaries and produces its own drama series in co-operation with local production companies and filmmakers. In 2014 HBO broadcast its successful original series Over the Head and Ears directed by Jan Hřebejk and an original crime series Mamon directed by Vladimír Michálek in 2015.

APA- Audiovisual Producers’ Association
Národní 28, 110 00 Prague 1
PHONE: +420 603 844 811
This email address is being protected from spambots. You need JavaScript enabled to view it.
www.asociaceproducentu.cz

Czech Film Commission
Národní 28, 110 00 Prague 1
PHONE: 420 778 543 290
This email address is being protected from spambots. You need JavaScript enabled to view it.
www.filmcommission.cz

FITES – Czech Film and Television Union
Pod Nuselskými schody 3, 120 00 Prague 2
This email address is being protected from spambots. You need JavaScript enabled to view it.
www.fites.cz

Film Distributors’ Union
nám. Winstona Churchilla 2, 130 00 Prague 3
This email address is being protected from spambots. You need JavaScript enabled to view it.,  www.ufd.cz