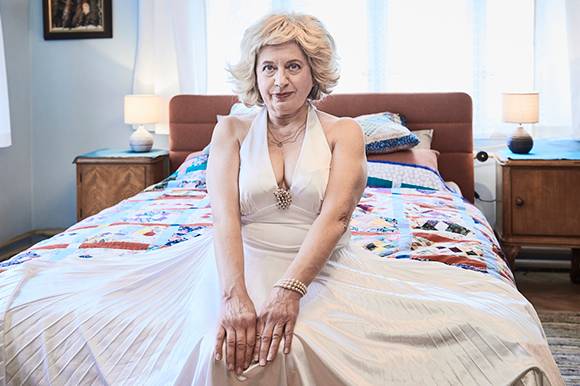 PRAGUE: Czech cinema had a good year in 2017, with international success of both feature films and documentaries, a film fund effectively supporting the development and production of numerous quality films, a growing number of coproductions, returning international film crews shooting on Czech locations and excellent box office results.

Among the most important titles shooting in 2017 were several period films, including Painted Bird / Nabarvené ptáče, directed by Václav Marhoul and produced by Silvescreen, Jan Palach, directed by Robert Sedláček and produced by Cineart TV Prague, and Toman by Ondřej Trojan, produced by Total HelpArt T.H.A..

The long awaited fairy tale The Magic Quill / Čertí brko, directed by Marek Najbrt and produced by Punk Film, was shot in the summer of 2017.

The romantic fantasy based on the acclaimed novel Hastrman, directed by Ondřej Havelka and produced by První veřejnoprávní,, was shot from July to September 2017.

There were also numerous foreign productions shooting in the Czech Republic in 2017. Unique Czech locations, the experience and expertise of the Barrandov Studio, which hosts one of the largest costumes and props rental houses in Europe, are constantly attracting big and small productions.

The year 2017 saw a boom of German TV productions shooting on Czech locations. According to Helena Bezděk Fraňková, the Director of the Czech Film Fund, 14 television films and series spent over 33 m EUR / 850 m CZK in nearly 400 filming days in the Czech Republic. “German television productions have in recent years been our most loyal ‘clients’ and Germany clearly surpasses other countries in terms of the number of foreign projects shooting here”, Helena Bezděk Fraňková said.

The eight-part series Das Boot, directed by Andreas Prochaska and produced by Bavaria Fiction, is the biggest German production shot in the Czech Republic since the introduction of incentives in 2010. Stillking Films provided services. Out of the total budget of 25 m EUR, about 14 m EUR were spent at the Barrandov Studio.

Other important international productions shot in the Czech Republic in 2017 were: the first season of the Genius series, directed by Ron Howard and produced by Fox 21 Television Studios, Imagine Television, OddLot Entertainment and EUE/Sokolow for the National Geographic channel and with Stillking Films providing services; the postwar drama The Aftermath, directed by James Kent and produced by Fox Searchlight Pictures and Scott Free Productions with Sirena Film servicing; Xavier Dolan’s Death and Life of John F. Donovan, produced by Lyla Films and Sons of Manual and serviced by Film United;; Ben Levin’s The Catcher Was a Spy, produced by PalmStar Media, Animus Films, Serena Films, in association with Windy Hill Pictures, with Czech-Anglo Productions servicing, and the two-part film Maria Theresa directed by Robert Dornheim and produced by Maya Production, MR-Film Gruppe (A) and BETA Film GmbH (A).

A total of 26 domestic feature films, two long animated films and 27 documentaries longer than 60 minutes had their premieres in 2017. Of these, 13 are debuts and 20 are coproductions, including six minority coproductions.

Many important feature films released in 2017 were inspired by events and personalities from the Czech history.

A Prominent Patient /  Masaryk, directed by Julius Ševčík and produced by In Film, premiered in the Berlinale Special section of the 2017 Berlin IFF. This drama, focusing on the controversial figure of the Czech Minister of Foreign Affairs Jan Masaryk in the 40´s, was domestically released by Bioscop in the spring of 2017.

Milada, directed by David Mrnka and produced by Loaded Vision Entertainment, was released by Bohemia M.P. in 2017 and is available in numerous language versions on Netflix, which co-funded its production. The film is based on the tragic story of the politician Milada Horáková, who was unjustly sentenced and executed during Stalin's political processes in the 50s.

Ice Mother / Bába z ledu, directed by Bohdan Sláma and coproduced by the Czech company Negativ, Slovakia’s Artileria and France’s Why Not Productions, was voted as the Czech Oscar bid in the Foreign Language Film category in 2017. The film was distributed in the Czech Republic by Falcon.

Among the most interesting documentaries in 2017 were Červená by Olga Sommerová and Miroslav Janek´s Universum Brdečka, both produced by Evolution Films and released in cinemas by Aerofilms.

Little Harbor/ Pátá loď, directed by Iveta Grófová and produced by Silverart and endorfilm, won the Crystal Bear for best film of the Children's Jury in the Generation Kplus section of the 2017 Berlin IFF.

Filthy / Špína, directed by Tereza Nvotová and produced by Bfilm and Moloko Film, premiered at the Rotterdam IFF.

There are seven distribution companies in the Czech Republic with a market share of over 1%.

In 2017, Falcon, the distributor of some major US studios’ productions and also high-profile Czech films, had 32.1 % market share and replaced the last year’s top distributor Cinemart, which had 29, 2% market share. Vertical Entertainment (Freeman) ranked third with 16.8%, followed by Bioscoop/AQS with 11.5% market share.

The year 2017 was very good for Czech cinemas. Although the results slightly decreased compared with 2016, it was still the second best year in the history of the independent Czech cinema market.

However, there was a considerable drop of over 10 percent in the admissions to domestic titles, which reached only 20 percent of the total admissions in 2017.

There were three Czech films in the admissions top ten: Barefoot, the comedy River Rascals / Špunti na vodě directed by Jiří Chlumský, produced by Fresh Lobster in coproduction with Fénix Film, Sibira Pro and Fénix Distribution (distributed by Bioscop), and the 2016´s hit Angel of the Lord 2, directed by Jiří Strach, produced by Marlene Film Production and distributed by Falcon .

In 2017 the market share of multiplexes, counting 256 screens and 44,464 seats, reached 75.4%. The largest multiplex cinema operators are Cinema City and Cine Star.

The Czech Film Fund remains the main tool for public support of Czech cinema. The funding is granted in 10 areas: development, production, distribution, promotion, technological development, publications, education and training, festivals and events, protection, preservation and access to film heritage. The fund also supports the activities of film offices in the Czech Republic, helping Czech and foreign filmmakers to shoot in various regions of the country.

Since the introduction of the new law in 2013, the Czech Film Fund has also administered the Czech incentives scheme. The incentives are granted in the form of a 20% cash rebate on Czech production costs and 66% on the withholding tax on non-resident labor costs paid in the Czech Republic. The incentives are available for feature films, TV and animation series, animated and documentary films. Maximum eligible costs are set at 80% of the total budget.

The pre-condition of eligibility for the incentive is the minimum volume of the Czech cost:

The amendment to the audiovisual law approved in May 2016 came into effect on 1 January 2017. An improved incentives scheme was introduced, which makes the system more flexible for film productions.

The rebate is no longer subject to a yearly cap. Producers can register the project at any time during the year and immediately receive a registration certificate. Upon receiving the registration certificate, the producer can apply for the allocation of the rebate. The timing of the application is important. Within four months after the application is filed, at least 10 shooting days must be completed in the Czech Republic. Rebates are allotted throughout the year, depending on the beginning of production. For animated films, if shooting in the Czech Republic is longer than 10 days, producers are able to receive their grants in two parts: first upon the completion of the shooting in the Czech Republic and the second part after the completion of all Czech production.

The National Film Archive handles both domestic and international sales of films made in Czechoslovakia before 1991 and produced by Barrandov and Zlín film studios (both state owned at the time).

TV stations also increased the number of programmes available on the internet, bringing them to a larger audience. TV NOVA has its video library Voyo.cz, Prima group runs PrimaPlay.cz, while the Czech TV offers its programmes via iVysílání.cz.

The market for TV advertising is dominated by Nova and Prima (90%), while advertising on the Czech Television is limited to a minimum by the law. The television is traditionally the strongest advertising medium in the country.

Television stations play a large role in the production of quality content for local film and TV productions. The Czech TV has become a permanent partner of Czech cinema, with its in-house production sector Film Center coproducing many feature films, including the already mentioned high-profile films Barefoot, Little Crusader, Jan Palach or Garden Store. The Czech TV is also a coproducer of almost all documentaries released in the cinemas.

Phone: +420 224 301 278
This email address is being protected from spambots. You need JavaScript enabled to view it.
www.fondkinematografie.cz

APA- AUDIOVISUAL PRODUCERS’ ASSOCIATION
Národní 28, 110 00 Prague 1
Phone: +420 603 844 811
This email address is being protected from spambots. You need JavaScript enabled to view it.
www.asociaceproducentu.cz

CZECH FILM AND TELEVISION ACADEMY
Karlovo nám 285/19, 120 00 Prague 2
This email address is being protected from spambots. You need JavaScript enabled to view it.
www.cfta.cz

CZECH FILM COMMISSION
Národní 28, 110 00 Prague 1
Phone: 420 778 543 290
This email address is being protected from spambots. You need JavaScript enabled to view it.
www.filmcommission.cz

FITES – CZECH FILM AND TELEVISION UNION
Pod Nuselskými schody 3, 120 00 Prague 2
This email address is being protected from spambots. You need JavaScript enabled to view it.
www.fites.cz

FILM DISTRIBUTORS’ UNION
nám. Winstona Churchilla 2, 130 00 Prague 3
This email address is being protected from spambots. You need JavaScript enabled to view it. , www.ufd.cz