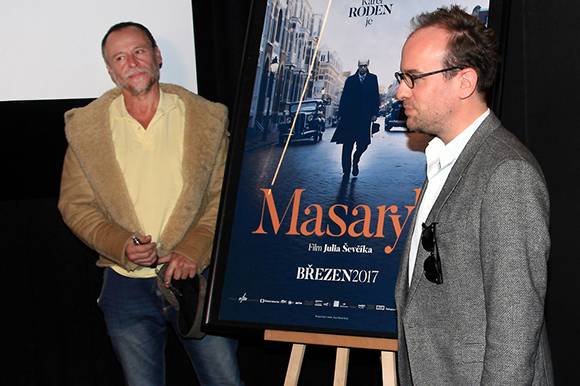 The script written by Andrew Shaw is based on the famous novel of the same title by British author Simon Mawer, nominated for Man Booker Prize in 2009, and is connected with the iconic modernist Tugendhat villa. Designed by the famous German architect Ludwig Mies van der Rohe, the Tugendhat villa was for many years under reconstruction. In the 1930’s it was owned by a wealthy Jewish couple who escaped Czechoslovakia before the Nazi Occupation and never returned because of the rise of Communism in 1948.

The Glass Room / Skleněný pokoj is made by the team of Prominent Patient, directed by Julius Ševčík and produced by Infilm, winner of 12 Czech Lion Awards in 2017. Rudolf Biermann is producing through Infilm in coproduction with the Czech Television and the Slovak private channel JOJ TV.  The Brno Film Office is helping with the organisation of the shooting and the city of Brno is supporting the filming financially. Private investors are also involved.

Shooting at the Tugendhat villa is planned for three parts: from 1 to17 March, from 1 to 18 June and from 1 to16 July 2018, when the building and garden will be completely closed for the public.

The theatrical release is planned for spring 2019.

Infilm
www.infilm.cz
This email address is being protected from spambots. You need JavaScript enabled to view it.

TV JOJ
www.joj.sk
This email address is being protected from spambots. You need JavaScript enabled to view it.

Czech Television
www.ceskatelevize.cz
This email address is being protected from spambots. You need JavaScript enabled to view it.