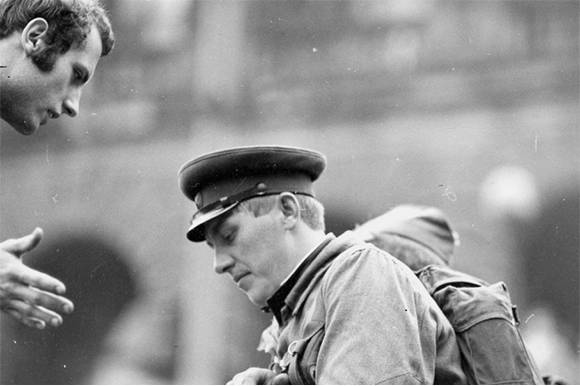 My Unknown Soldier by Anna Kryvenko

JIHLAVA: Czech documentary filmmakers are participating in international coproductions and taking on international topics and settings in increasing numbers. A clear example of this can be seen in the Czech Joy competition section of the 22nd Jihlava International Documentary Film Festival, running through 30 October 2019.

The selection of 13 films, twelve of which are world premieres, includes films set in Croatia, Hungary, Israel, Nairobi and Australia, as well as films with international connections ranging from Japan to Russia.

Czech coproductions turn up in other sections of the festival as well. The Between the Seas competition includes the Slovak/Austrian/Czech/French film The Good Death by Slovak director Tomas Krupa produced by HAILSTONE with support from the Slovak Audiovisual Fund and coproduced by the Czech company Masterfilm and the Slovak TV. The debut film section First Lights has two Czech coproductions, both with up-and-coming Czech production house Analog Vision. My Unknown Soldier, a Czech/Latvian/Slovak film by Ukrainian director Anna Kryvenko, was produced by Analog Vision with coproducers Baltic Pine Films (Latvia), Wandal Production (Slovakia), Slovak TV, Czech TV and the FAMU film school. Boy of War, a German/Czech film codirected by French director Cyprien Clement-Delmas and Ukrainian director Igor Kosenko for Fabian & Fred (Germany), was coproduced by Analog Vision.

Events such as the Emerging Producers platform, now in its seventh year, at the Jihlava IDFF are in a large part responsible for enabling the connections between documentary film producers. The festival is also home to the Ex Oriente international training programme, which includes three Czech projects among the 12 selected films. Both serve as networking launchpads for producers and directors in early stages of their documentary filmmaking careers, with resulting relationships on display at the 2018 Jihlava IDFF.