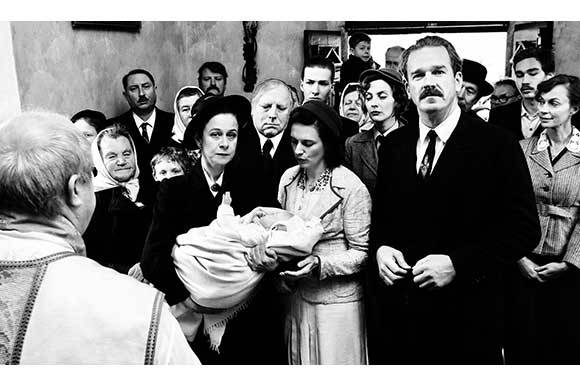 PRAGUE: Bohdan Sláma, known mainly for his wry comedies, is trying his talent on a different genre this time, namely a period film. Shadow Land / Krajina ve stínu is based on historical events after 1939 in a Czech border region of extremely dramatic fate. To achieve an authentic period atmosphere, Sláma is shooting the film in black and white.

A good-looking city girl, Marie, marries in the small Austrian town of Schwarzwald. The town in the area forcibly annexed by Czechoslovakia in 1920. At the beginning of WWII, most of the Czech-speaking citizens chose German nationality. While peaceful during the war, the area was swept by violence right after the war. A group of malicious neighbours force the wealthiest citizens of the town to stand in front of a people’s court and they are murdered. Marie and her two children have to cross the border into the woods, where they build a temporary shed of branches.

Sláma, who normally writes scripts for his films himself, entrusted this task to Ivan Arsenjev. The shooting started on location at the beginning of April and will continue till the beginning of June. Shadow Land is expected to premiere in 2020.

The film produced by Luminar film was supported by the Czech Film Fund and Film Foundation. The Czech TV is coproducing.