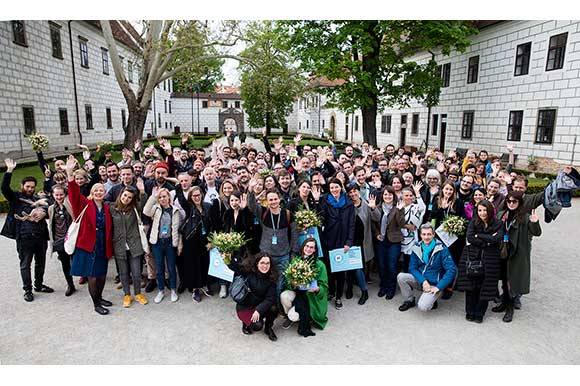 TREBON: An overflow crowd turned out for the awards ceremony of the newly re-named and expanded CEE Animation Forum, which concluded on 8 May 2019. Awards were handed out in three categories, along with a number of additional prizes for attendance at other workshops and events.

The French film project Allah is Not Obliged won the jury’s main award in the feature film category, along with a prize of 1,000 EUR. Hungary took the TV series award with the project The Cat Princess and a 1,000 EUR prize. The Short Film award went to the Latvian sand animation project Kafka in Love, also accompanied by a 1,000 prize, directed by Zane Oborenko and produced by Sabine Andersone.

A record number of applicants applied for the forum, leading to an overall high quality of projects selected for pitching.

The forum was also the conclusion of the first CEE Animation Workshop, which held its third six-day module in Trebon in the days before the pitching sessions began. Thirteen teams of filmmakers were recognised at the closing ceremony. Another project under the organiser’s umbrella, CEE Animation Talents, presented the first screening of a selection of short films which will travel to partner festivals.

EAVE presented a scholarship to the five-day EAVE Marketing Workshop to the Romanian producer Ioana Lascar of deFilm with the Romanian/Moldavian project Viskovitz directed by Serghei Chiviriga.

The new Pop Up Film Residency prize of a three-week residency went to the Irish film project Piece directed by Alan Holly and produced by Ciarán Deeney and Carla Vulipiani. The project also won the Special Mention in the Feature Film category.

The CEE Animation Workshop Scholarship Award went to Vessela Dantcheva, producer of the Bulgarian short film project Where To produced by Compote Collective and directed by Asparuh Petrov.

The main awards were: