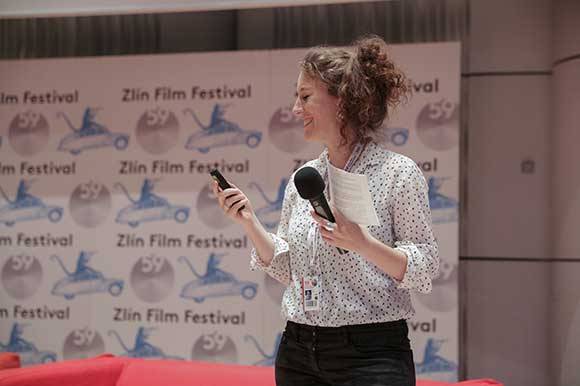 ZLIN: The question of how we can run an ecologically responsible film industry is becoming more compelling every day. If you still might have doubts about that, a company such as Secoya Eco-Tournage can easily convince you. The Zlin Children & Youth Film Festival invited this French company for a presentation in the context of the Green Screen programme, in which eight countries (Slovakia, UK, France, Belgium, Poland, Romania, Sweden and Spain) are trying to reduce the environmental impact of filmmaking without extra costs for the film producer.

Chloé Guilhem (Secoya Eco-Tournage) guided a group of children’s film professionals and film students through a series of initiatives and guidelines, with ‘eco-production’ as a keyword.

The ecological impact of the film business is immense. The amount of energy consumed at a standard film set equals the energy budget of a small country. Of all Californian industries, Hollywood has the second biggest ecological footprint, right after the oil industry. We’re talking transportation, CO2 emissions, enormous amounts of plastic bottles and surplus food and general pollution (like fake snow coming in small toxic bulbs). Secoya is careful when formulating its priorities. “We know that the complex film logistics will often put ecology in the second place,” says Chloé Guilhem. “Artistic freedom always comes first, but then environmental impact shouldn’t be neglected. That’s why Secoya comes with strategy, staff, stuff and stats.” And solutions! Like using flasks instead of plastic bottles, providing caterers with local, organic products and defining strategies to save money on the use of batteries, coffee and printing paper, about which the entire film crew is informed through regular newsletters. “When we’re confronted with a negative approach from directors, presuming that ‘all this will be way too expensive’, it’s up to us to come up with the right answers. We have to be prepared for that.”

Secoya is the brainchild of two former location managers, Charles Gachet-Dieuzeide and Mathieu Delahousse, who had experienced the massive ecological footprint of a film set once too much. Now their sustainability consultancy should improve the situation on set, as well through short term (like a Louis Vuitton ad) and long-term (like the French TV drama series Baron Noir) commitments.

Eco consultancy can be a successful business and the market is growing fast, with Green Screen as a platform for experts to share experiences. In Slovakia and the Czech Republic a “green manual” is currently being prepared (to be published this summer); in France filmmakers can apply for an “eco-bonus” incentive; the Flemish Film Fund recruited a permanent “eco expert" and in the UK a certificate system was launched. Finding the right ambassadors is crucial and one star on a set (like Juliette Binoche and Marion Cotillard in France) can have a huge impact on the entire crew. In Cannes this year, there was a call from actors and directors for a more sustainable eco-approach.

One important piece of advice would be to start early. Which could mean:

Green Screen’s ambition shouldn’t focus only on the production industry. Film festivals often have a huge environmental impact as well and there’s still plenty of room for improvement there.