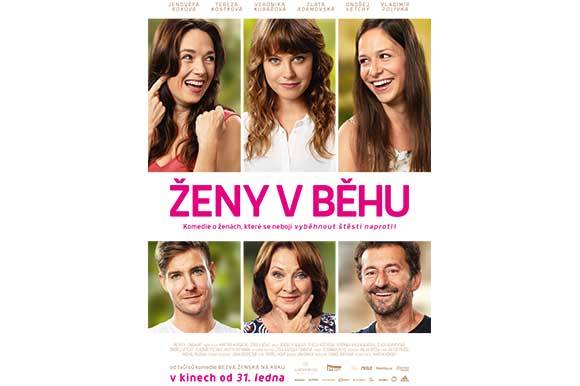 Women on the Run by Martin Horský

PRAGUE: Czech comedy Women on the Run / Zeny v behu, the debut of director Martin Horsky, is on target to smash all time Czech box office records racking up the biggest box office and admissions of any Czech film since 1992. Women on the Run is the latest film in a string of box office hits from from producer Tomas Hoffman.

Since the founding of Infinity Film in 2006, Hoffman has produced four number one Czech films, breaking the Czech all-time box office record with his latest film Women on the Run, and becoming the top grossing production company in the Czech Republic. Call him the 775 million CZK man. Tomas Hoffman is on a mission. FNE sat down with Hoffmann to find out what it takes to become one of the most consistent block-buster film producers in Central Europe.

Hoffman turned to film production after a successful career as a journalist, eventually becoming the editor of Czech Republic’s top film publications, and then running a distribution company, enabling him to bring both a critical perspective and a businessman’s eye to producing. He hit gold with his first film Holiday Makers, which became the most successful film of 2006 (with almost 800,000 viewers), was selected for the Tribeca IFF, and earned a best actress award for star Eva Holubova. Since then, Hoffman has managed to straddle both the commercial and art-house worlds, producing films that have screened at Berlin, Toronto, Pusan, Shanghai, Karlovy Vary and other leading international film festivals.

FNE asked Hoffman about his strategy for producing a Czech commercial hit film. “You have to like this kind of film and believe in what you are doing, and believe it’s important to please the audience. Without these commercial films, there would be no domestic industry, and the local audience becomes disconnected with their own cinema,” Hoffman said. “I produce films which I would like to see. I like commercial films because it’s great to feel that energy, and I like comedies. It’s not possible to do without loving the genre.” Hoffman also works on a tight budget, which he funds through his company, using the Czech film incentives (at 20%), but generally avoiding the grant application process, which is geared more toward art house films.

He's also thinking strategically about how to export the commercial success of his Czech hits, and is developing a new model that bypasses the traditional international sales path. Instead of aiming for international releases or a big Hollywood remake, Hoffman is making deals for remake rights with smaller countries and letting the film’s concept build its own momentum.

Hoffman tried a test run of the new model with his 2010 hit film Women in Temptation by Jiří Vejdělek. Lithuania’s ACME Film picked up the concept for a remake, which was released on 25 January 2019. It stayed in the number one spot for 3 weeks, and in the top 10 for 10 weeks, earning 700,000 EUR. Hoffman said he now has interest in remake rights for that film from Finland and Russia.

“Originally, I wanted to do it in English, but now I think smaller steps will capture the attention of a Hollywood producer,” Hoffman said. He expects to use the same strategy with Women on the Run. “When there isn’t some significant offer, I try to keep all rights, because then you can release the film yourself or sell it to some strong platform that operates across all countries.”

Hoffman also stays away from sending out screeners. He learned the hard way with his 2012 hit, Jiří Vejdělek's Men in Hope, which had over 850,000 domestic admissions. “I found out it was subtitled into Brasilian Portuguese and South American Spanish, so it means that a lot of people saw it in South America.”

In the Czech Republic, Women on the Run is holding strong, even moving up a spot to 13th place as it heads into its 20th week in distribution. Alex Danielis of the film’s distribution company Cinemart told FNE that it’s still a popular title. “Almost every open-air summer cinema wants this film. I’m sure we’ll go up to 1.4 m admissions minimum, maybe 1.5 m, this summer. We have more than 100 screens showing it in July.” He said there were three reasons for the film’s success. “It’s funny for women and it’s funny for men -- men don’t have a problem going to the cinema to see it with their wives. It also has age cross-over. And Czech attendance at cinemas is very high now. Last year was our best year since 1993, before commercial TV was introduced; and 2019 started even stronger.” Women on the Run alone could account for 8 percent of the annual box office, a reason that Danielis says, “We have a long partnership with Tomas that we want to maintain.” For the rest of the Czech audiences, the film will get a VOD/video and TV release beginning in the fall.

Hoffman’s dual critical and commercial perspective comes in handy as he faces the challenges of positioning his productions for a bigger arena. “I’m interested in having a share in the rights,” he says of a potential international remake deal, “but the main problem is to find someone who can separate the concept from the realities of a low budget Czech film.” And just in case Hoffman’s ambitious plans for Women on the Run hit a speed bump, not to worry. He has another five films in development, with plans to turn out a new film every two years.