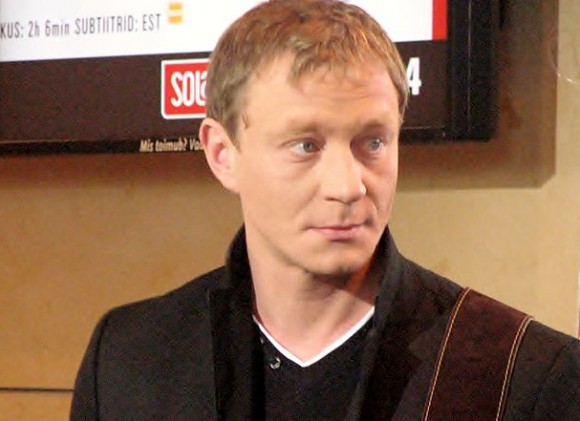 Photo by Ave Maria Mõistlik, via wikipedia.org (CC by, sa)

TALLINN: Kiur Aarma, Estonian film producer, screenwriter and musician had an international hit with the 2009 documentary Disco and Atomic War, which he produced and co-wrote (best documentary at Jihlava and Warsaw).

Aarma is bringing three projects to Cannes this year. He’s presenting his first full-length feature The Hoppers, which he’s making together with director Jaak Kilmi. He is co-writing the script for this historical drama with writer Tiit Aleksejev. The story takes place in 1913 on the island of Hiiumaa.  The budget is planned at 2 m EUR and they hope to start shooting in the late summer of 2014.

Aarma’s second project is the full-length documentary, The Gold Spinners with a budget of 300,000 EUR). The project is currently in the final stages of postproduction and will be completed by May of 2013. It tells the story of the birth, glory days and downfall of a strange, but powerful business empire – the film studio Eesti Reklaamfilm, the only studio producing commercials in the Soviet Union, headed by one man.

Aarma is also preparing to launch a new documentary project with director Marianne Kõrver, Measure of Man, and he’s looking for co-producers. The story goes back to 2007 when a world-changing, Estonian athlete had a simple and beautiful idea: our planet is covered with trash, we should start in our own back yards and clean it up! On 3 May 2008, more than 50,000 volunteers gathered all over little Estonia and cleaned up almost 10,000 tons of trash. The film will follow the story of their next challenge, planned for 3 May 2014.

Aarma first appeared on the scene in Estonia in the 1990s as a sharp, young journalist with a semiotics degree. He soon became the host of a popular talk show. After a stint in the public eye as a TV journalist, he left the limelight to focus on his work as a TV producer, musician (he plays guitar in one of Estonia’s most well-known bands, Lenna) and film producer/screenwriter.