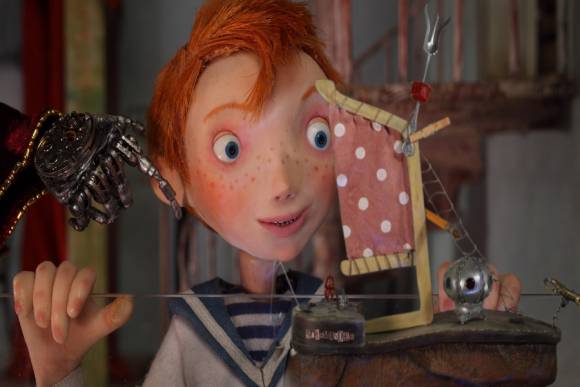 TALLINN: Acclaimed Estonian director Kaspar Jancis has just finished shooting his first long puppet animated film Morten and the Spider Queen aka Morten on the Ship of Fools. The 80-minute stop motion family adventure based on his own book Adventure on Salamander is an Estonian / Irish / Belgium / UK coproduction which will also have English and Gaelic versions.

Producer Kerdi Oengo told FNE that the aim is to distribute the film to cinemas all over Europe, but possibly also elsewhere. “In Estonian cinemas the film will be screened in Estonian language, but in Ireland both in English and Gaelic. And we will also have a French version of the film available. We presented the film this year at Annecy Works in Progress and the feedback was amazing,” said Oengo. In the English version the characters are voiced by Ciaran Hinds, Brendan Gleeson, Pauline MacLynn and young talents from Ireland, Cian O'Dowd and Susie Power. The Estonian actors are not yet confirmed.

The film will be co-directed by Riho Unt and Henry Nicholson. The script penned by Mike Horelick, Paul Risacher and Robin Lyons is centered on Morten, a curious 10-year old dreamer. He doesn’t have a mother and his father is away at sea, sailing in his own boat. Morten plays with a toy boat with only insects for crew. One day Morten is magically shrunk and awakes on his own toy boat. Crazy and surreal adventures follow.

Morten and the Spider Queen will be finished by the end of 2017 and the international premiere is planned for the spring of 2018. Sola Media is handling the sales.

Nukufilm
www.nukufilm.ee
This email address is being protected from spambots. You need JavaScript enabled to view it.