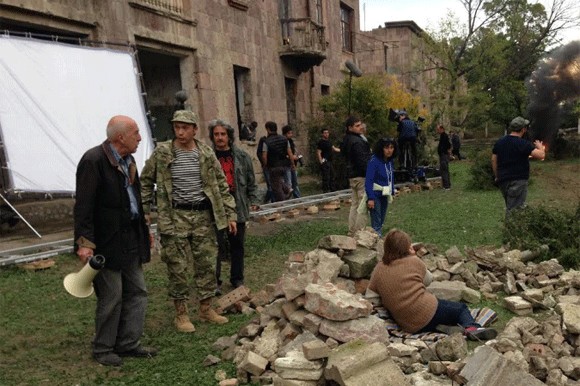 TBILISI: Winter Song/Chant d'hiver, the new feature of the acclaimed Otar Iosseliani, is moving to France for filming in December following shooting in Georgia 16 - 24 October 2014.

The helmer told the Georgian press that the film will talk about the nonsense of revolutions and about the dramatic chaos that every revolution brings, but the script and story are being kept secret until the premiere of the film. The place, country and time are not specified in the story imagined by Iosseliani.

Winter Song/Chant d'hiver (working title) is coproduced by Georgia's Studio 99 and France's Pastorale Films. The budget of the film has not been disclosed. The project is financially backed up by the Georgian Ministry of Culture and the French CNC. The Georgian shoot took place in the abandoned village of Pobeda, a former Soviet military camp.

The war scenes were shot with the support of the Georgian Ministry of Defence and the active participation of the Georgian Army which brought heavy armoured vehicles, military trucks and tanks and a vast amount of soldiers. Numerous extras were also used.

The cast consists mainly of non-professional Georgian and French actors, but a casting advertisement in France this autumn said that the film stars Michel Piccoli and Pierre Etaix. The premiere is set for 2016.

Production Information:
Studio 99
0162 Tbilisi, Titsian Tabidze st. 43
Tel./fax: 223 04 12
This email address is being protected from spambots. You need JavaScript enabled to view it.