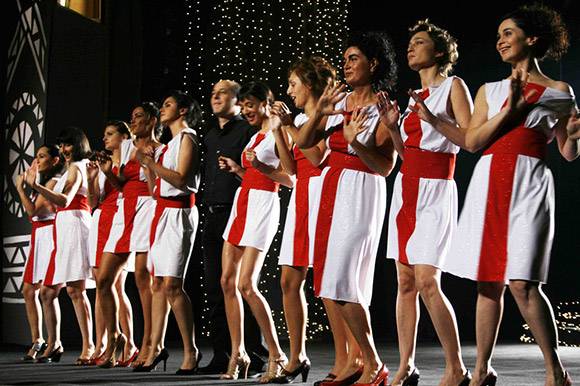 A construction company has been unable to finish the residential complex "Venice" for seven years. The owners' every attempt to complete construction ended with failure. On a cold November morning in a gray, dusty unfinished apartment building, 20 future residents of this house are gathered on the first floor. After seven years of stagnation, they have their first real chance to finish the building. One of the residents, a priest Father Alexander, has brought an investor: a wealthy businessman from his parish. He is planning to put a restaurant on the top floor, where the priest had an apartment and is willing to give it up for the restaurant. The investor's only condition is that the priest should get decent alternative space. However, the flats are sold except for a semi-cellar. Therefore, someone should agree to give their flat to Father Alexander. If they don't obey the condition of the investor, the company will have to pay the forfeit and cover all expenses that the investor had already spent. In order to pay him, the company will sell the apartments of the owners who haven't paid the whole cost of the flat. The house wasn't finished, and almost no one paid the complete price. If they don't agree, they will lose everything.

The film is produced by the Georgian company 20 Step Productions.The producers are Vladimer Katcharava, Rusudan Chkonia, Veronica Meier and Palmyre A. Badinier. The project is coproduced with Nike Studio Ltd (Georgia), AKKA FILMS (Switzerland) and Ape& Bjørn (Norway). It was supported by the Georgian National Film Centre with 156, 250 EUR / 500,000 GEL.

‘’The total budget is estimated at 700,000 EUR / 2,240,000 GEL. The project has received funding from BAK / OFC (Federal Office for Culture) and CINEFOROM in Switzerland, and from SORFOND in Norway,” Vladimer Katcharava told FNE.

Director/scriptwriter Rusudan Chkonia told FNE, "A major part of the film will be shot by handheld camera, with really long and continuous shots and dynamic change of the mise en scene. The camera strategy will be following: Throughout the whole film, the camera roams in the building with long continuous takes, following the characters who are wandering in the endless labyrinths of the house: in dim shadowy corridors, sunny balconies, partly illuminated staircases, garage, yard, backyard, "apartments" and in the total blackness of the basement. By deep space staging and deep focus cinematography we maintain the spatial and temporal unity of recorded events. Often the camera will catch reactionary frames rather than actions, sometimes the main action will be outside the frame and the camera will focus on a parallel story. A sense of vanity and chaos will create a film atmosphere. The closer we are getting to the finale, the more claustrophobic the camera gets, and the geography of the house becomes more and more abstract. The camera is following characters who are wandering in a gray, empty, concrete building and we are getting the feeling that there is no way out from this dark labyrinth.”

The project is in the pre-production stage. The process of selecting actors and finding locations is now underway. The date, place of the shooting and premiere has not been announced.

Producer:
20 Steps Productions (Georgia)
This email address is being protected from spambots. You need JavaScript enabled to view it.