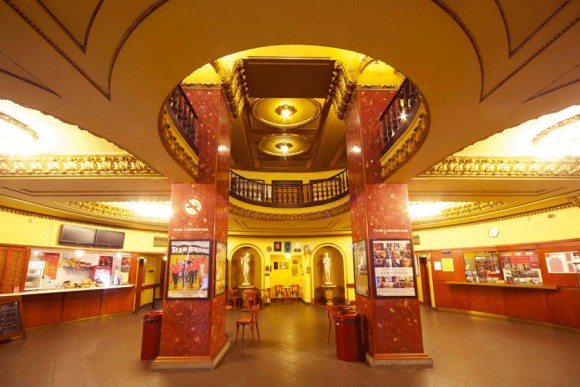 Budapest Film Zrt. is the largest art house cinema network in Hungary, operating six cinemas in the capital city including a multiplex (Corvin Cinema), an event cinema (Kino Café), as well as four leading art house cinemas, each with a specific profile, and all of them members of Europa Cinemas: Muvesz, Toldi, Puskin and Tabán Kino Téka. The company's CEO and Chairman of the Board is Zoltán Körösvölgyi.

This month we spoke with Orsi Farkas, assistant in film programming and tenders. She graduated Film Studies in 2011 and she has been working with Budapest Film Zrt since then. She told us how Budapest Film Zrt. is coping with the competition and coping with survival since it’s a non-profit organisation without any central governmental financial support.

Orsi Farkas: Firstly and basically it is the lack of a consequential, constant political strategy supporting cultural organizations and activities, which leads to the lack of foreseeable central governmental financial supports and funds. This makes it more difficult to survive, to run six culturally focused, non-profit cinemas.

The second challenge is the fight against the strong monopoly of the market leader exhibitor, IT Cinemas, which – with their 19 cinemas – owns approximately more than 90% of the Hungarian cinema market in volume and value as well. IT Cinemas is also active through their company as distributor.

Another challenge is the wide choice of films to choose from when creating programming and festivals. We have to fight to get film rights, often for Hungarian films, too.

O.F.: Our company’s mission is, being the leading art house and classic cinema exhibitor in Budapest and Hungary, to keep on providing quality moving pictures content in our cinemas, as well as other culturally valuable initiatives and a comprehensive young audience cinema program called Suli-Mozi (School-Cinema). In the framework of this latter project we focus on educating a responsive and open audience of children, from toddlers to students.

Each of our cinemas has its own image that we take into consideration while doing the weekly programming. Corvin is the popular choice, quality blockbusters and commercial movies. Művész plays hardcore art house films and has a strong regular audience. Puskin focuses on classic quality films. Toldi focuses on youngsters and intellectuals, screenings of rare treasures and fresh alternative premieres. Tabán and Kino Café are mostly for events, film clubs, school screenings and special screenings.

In 2014 the most successful films in our cinemas were The Grand Budapest Hotel, Nymphomaniac: Vol I and II, Viva la Libertá, Only Lovers Left Alive, Fading Gigolo, Kratfidioten/In Order of Disappearance.

O.F.: Creating and hosting festivals and events has been always our priority besides the current running films. In 2013 the number of special programmes hosted in our five cinemas reached 682 (Tabán wasn’t in our operation last year). In cooperation with embassies, foreign cultural centers and institutes, Hungarian art colleges and universities, etc. we try to diversify our programming. Budapest FilmZrt.’s goal is not only to maintain this huge number of festivals, but to initiate new ones calling in other exhibitors, distributors, and any cultural institutes all over Hungary.

O.F.: As mentioned before, our first concern is to gain funding to continue operating the cinemas and to fill them with quality films from all over the world. Since we don’t get enough financial support from central sources, we apply for tenders as much as we can afford. That’s why Europa Cinemas’ support is essential for our survival. Every year we exceed the 60% rate of European films. Our audience likes these films and craves for new ones.

O.F.: We offer several programmes for different age groups. In a partnership with embassies, schools, local authorities and other institutions in our cinemas there isn’t a day without such specially focused programmes.

We would like to attract young audiences with the atmosphere and the offer of our cinemas. We want to engage more teenagers and students to prefer viewing films in cinemas instead of downloading them. Our cinemas are not just meeting points but also real community lounges, cool places to go and hang with friends, to discuss even the movies and take part in the programmes and concerts or just to chill. Our projects for toddlers (in Puskin and in Tabán) and for pupils and students (the Suli-Mozi program) are very strong and popular.

O.F.: The mission of our young audiences programme entitled Suli-Mozi (School-Cinema) is to use the unique opportunities offered by moving pictures to provide exciting programmes to educating young audiences, reaching the broadest possible spectrum of age groups, subjects and occasions.

A special programme within our young audiences program Suli-Mozi is called TABU (Taboo), and consists of 40 films. This is the most popular and effective young audiences programme within our complex Suli-Mozi programme. The subject of these movies is obviously taboo: we have several categories like adoption, mourning and violence in family or in school, drugs, crime, sex and contraception, homosexuality, etc.

Dealing with those topics, that are hard to understand needs a lot of talking. We cooperate with one of the biggest Hungarian book publishing companies, Móra Könyvkiadó in the programme. Authors, young authors, drama teachers and psychologists come to talk and play with the students about the given film and a related book, to find the problems and how one should deal with them, by helping the children to process what the movie is about.

Besides this we created the Puskin Kuckó and recently the Tabán Kuckó programmes for toddlers and infant-school children, with screenings of valued animation films, teaching crafts, playing corner, live concerts, etc.

For teenagers, students and young intellectuals we organize special screenings and events serving their taste and support our cinemas on the social media pages.

O.F.: More than a year ago we saw the need for digitalising our cinemas inevitable if we wanted to keep on providing the widest possible choice of programming. Accordingly, we finished digitalisation in May 2013 (it was one of the screens in Művész Cinema). We received some funding to achieve that from the central government, the local city council, as well as from MEDIA Programme, but still we had to find funding from our own resources to cover the costs.

The installation of DCI technology gave us wings to diversify and fine-tune our programming. All of our cinemas developed regarding admission and box office income figures throughout the past year, and the development, luckily, continues in 2014, too.

Corvin Cinema is the only stand alone and continuously operating multiplex cinema in Budapest. This more than 90 years old cinema was restored to its original beauty in 1996. Corvin is a fully digitalised cinema with six screens, showcasing quality popular programming. Corvin also serves as home to the grand opening

ceremonies of most Hungarian blockbusters, as well as to a number of major film-related events.

Corvinköz 1.
Budapest, 1082, Hungary
www.corvinmozi.hu
ZsuzsannaTalum: This email address is being protected from spambots. You need JavaScript enabled to view it.
Phone: +36 1 459 5050

Művész (meaning artist) Cinema was built in 1910. The leading and archetypical arthouse cinema of Budapest and Hungary has five digitalised screens of different size and can accommodate 500 guests. Művész is also a meeting place and a hub of cultural life in

Terézkörút 30.
Budapest, 1066, Hungary
www.muveszmozi.hu
Gábor Balogh : This email address is being protected from spambots. You need JavaScript enabled to view it.
Phone: +36 1 459 5050

Puskin Cinema, the classic movie theatre of the city, has been screening motion pictures since 1926. After numerous renovations, the last reconstruction saw the emergence of the cinema: nowadays five, fully digitalised screens with quality sound systems make the event of attending even more memorable. Since this cinema has managed to preserve the original and characteristic architectural and interior

features, it is no surprise that many international cultural institutes and partners prefer this venue for film weeks and festivals. Puskin Cinema is also active in introducing alternative contents, projected classic concert and opera performances, as well as programs offered for the youngest audiences.

Kossuth Lajos u. 18.
Budapest, 1053, Hungary
www.puskinmozi.hu
Balázs Kalmanovits: This email address is being protected from spambots. You need JavaScript enabled to view it.
Phone: +36 1 429 6080

Toldi Cinema (named after a famous Hungarian historical fiction character) opened in 1932. Following a comprehensive renovation in 2008 the two-screener cinema was also recently fully digitalised and has a screening capacity of 260 seats. This modern art house

cinema is home to an incredibly high number of popular events and festivals (including Titanic, Verzió, Anilogue, EuShorts), which attracts lots of young visitors.

Bajcsy-Zsilinszkyút 36-38.
Budapest,1054, Hungary
www.toldimozi.hu
András Horváth: This email address is being protected from spambots. You need JavaScript enabled to view it.
Phone: +36 1 472 0397

Kino Café, the currently event-based cinema, was founded in 1911. After several changes in name, everyone in Budapest has been calling the cinema Kino for the past years. Instead of following a screening schedule, both halls of this friendly two-screener cinema serve as a basis for out-of-the-ordinary programmes such as film clubs, school screenings, film festivals, theatrical performances and concerts.

There is a nice bar operating in the lobby with the city’s best coffee and ‘flodni’ cake. Kino Café is home to the unique young audiences program offered by Budapest Film Zrt., called Suli-Mozi (School-Cinema).

SzentIstvánkörút 16. Budapest, 1137 Hungary
www.kinocafe.hu
Judit Tóth: This email address is being protected from spambots. You need JavaScript enabled to view it.
Phone: +36 1 224 5610

Tabán Kino Téka Cinema was also built in 1910, and was reopened after an all-inclusive renovation in March 2014. The cinema’s profile was redefined to a modern, open, minimally designed, welcoming place with a quality art house programming and a bar offering hand-made, healthy foods and drinks (no alcoholic beverages). Like Kino Café, Tabánalso offers a permanent opportunity for young audience programming with its out-of-the-ordinary events such as film clubs, school screenings, film festivals and theatrical

Krisztinakrt. 87-89.
Budapest, 1016, Hungary
www.tabankinoteka.hu
Balázs Kalmanovits: This email address is being protected from spambots. You need JavaScript enabled to view it.
Phone: +36 30 731 4975