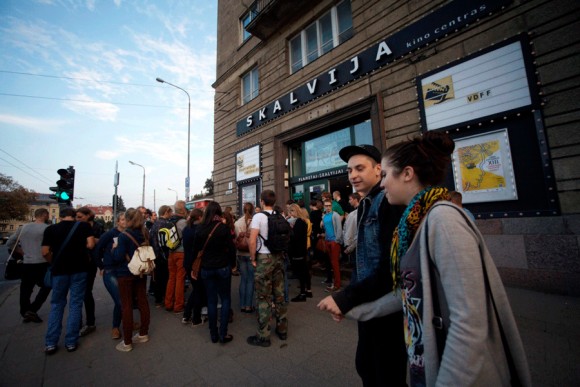 This month we spoke with Vilma Levickaitė, the manager of Skalvija Cinema Center, a small and cozy art house cinema situated in central Vilnius. Well known amongst film lovers for its distinctive repertoire, the cinema is focusing on non-commercial European and world cinema, both classics and recent film, and is also the major venue for cinematic events: festivals, meetings with filmmakers, retrospectives, and special screenings such as the Vilnius Documentary Film Festival.

The cinema hosts over 58,000 spectators in more than 1,200 screenings per year.
Skalvija is a member of two networks, Europa Cinemas and CICEA. It is also involved in film distribution and it is organising courses on scriptwriting, directing, editing, film history, and also outdoor filmmaking workshops.

Vilma Levickaitė: The biggest challenge is the lack of stability in culture and film policy in the country. Being an art house means hard and profound work with art and high culture projects that need to be helped by state funds. We, as a cinema, have developed several long-term initiatives whose existence depends on at least a little money from the state. The lack of policy and clear long-term priorities disrupts consistent development of the audiences, and film culture in general.

V.L.: We prefer screening interesting, sometimes even “hard core” auteur films such as Amour by Michael Haneke, Holy Motors by Leos Carax, or Hannah Arendt by Margarethe von Trotta. We like programming films that give the audience not only emotional, but also intellectual satisfaction, films that are first of all, pieces of art.

V.L.: Yes, indeed art house cinemas very often are home to film events. And of course it helps to bring people in, giving them excitement, valuable meetings and discoveries, deeper insight in film. To speak more generally, it helps in building trust and loyalty between cinema and its audiences.

V.L.: To be a member of Europa Cinemas means constantly keeping a finger on the pulse of most important issues in the European film industry. Thanks to the network we receive the latest updates regarding new developments in the European film policy, trends in cinema-going, challenges from new media and technology, etc. On the other hand, the financial subsidy gives our cinema more stability which is very important.

V.L.: We are very keen on providing young people with an opportunity to learn more about film and filmmaking. Education is one of the key activities. Believing in three core elements of film education we provide young audiences with the possibility to watch great films, to talk about them and put hands on practical filmmaking. Five year old children may watch films on weekends with their parents, meet film professionals in Q&A’s, and participate in animation workshops (Karlsono Kinas). Teenagers may participate in school cinema programmes for watching films, participating in film talks or even film workshops for the classes (Mokausi is Kino). Young people attend the film school for teens that operates as long-term (one to two years) after school classes (Skalvijos Kino Akademija opened in 2007). Students are also welcome to attend special price screenings, film talks, film courses, etc.

V.L.: It was a question of life and death. Now we are able to screen every film available for distribution, cooperate with all the distributers and festivals, and with some exceptions we are now able to screen films at the same time as bigger cinemas. And what is the most joyful, we are now able to programme classics, because more and more companies in the world invest in the digitalisation and restoration of old films and they become more and more accessible for little cinemas. I hope digitalisation will help us create quality film programmes and ensure diversity.

www.skalvija.lt
This email address is being protected from spambots. You need JavaScript enabled to view it.