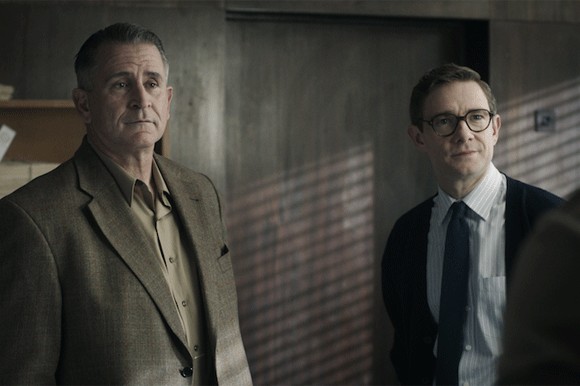 VILNIUS: The British Broadcasting Company BBC is completing production on the TV movie The Eichmann Show in Vilnius, Lithuania.

The Eichmann Show follows events surrounding what was described as the “trial of the century,” broadcast in 37 countries over four months as one of the most notorious Nazis – the man who had overseen the death camps – was brought to justice. He was eventually sentenced to death and hanged in 1962. Some 80% of the German population watched the trial, which became the first ever global TV event, shocking the world with its first-hand testimonies from survivors recounting the evils of the death camps.

English actor Martin Freeman plays the groundbreaking producer Milton Fruchtman. Freeman is best known for portraying Tim Canterbury in The Office, Dr. John Watson in Sherlock, Bilbo Baggins in Peter Jackson's The Hobbit film trilogy, and Lester Nygaard in Fargo. The film also features Anthony LaPaglia, a Golden Globe Award winner for his role in the US television series Without a Trace. Adolf Eichmann is played by a Lithuanian actor Vaidotas Martinaitis. Other cast members are Rebecca Front, Andy Nyman and Nicholas Woodeson.

The Eichmann Show is directed by Paul Andrew Williams and written by Simon Block. It is produced by Laurence Bowen and Ken Marshall for Feelgood Fiction. Martin Davidson is the Commissioning Editor for the BBC.

Filming started on the 9 October 2014 in Vilnius and the shoot will complete on 5 November. The Eichmann Show will air on BBC Two in early 2015 as part of the BBC’s commemoration of the 70th anniversary of the liberation of Auschwitz-Birkenau.