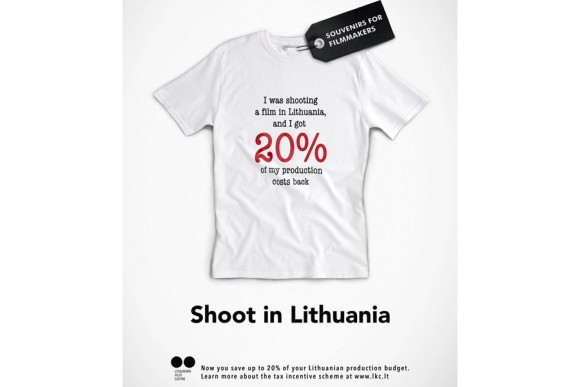 From 11 to 19 February meet the Lithuanian team at the European Film Market hosted at the Marriot hotel (Inge-Beisheim-Platz 1) during the 66th Berlin International Film Festival. At the Lithuanian Films stand no. 115 we will share  information about the latest Lithuanian films, our film industry, attractiveness of our tax incentives scheme, shooting locations, coproductions and commissioned productions as well.

The Lithuanian Film Centre in collaboration with the Berlinale Coproduction Market will present an attractive scheme of tax incentives and will reveal the advantages of shooting in Lithuania on 15 February at 3:30pm at the session ‘Countries-in-Focus’ (Niederkirchner Str. ) The remarkable results in 2015 demonstrate the potential of the Lithuanian film industry as well as the effectiveness of the incentive scheme.

On 14 February the world premiere of Lithuanian director Mantas Kvedaravicius's documentary film Mariupolis will be held in the ‘Panorama Dokumente‘ programme. Following his sensitive and moving film Barzakh (Panorama 2011), which depicted the search for a man gone missing in Chechnya, director Mantas Kvedaravicius trains his camera once more on a conflict zone and observes and accompanies people who live there. Everyday life develops a poetry of its own, which occasionally can seem absurd.

Mariupol lies in eastern Ukraine, where the Kalmius river flows into the Sea of Azov. The city, which is centred around the steel works, seems calm but the encroaching conflict between pro-Russian rebels and Ukrainian government forces is tangible everywhere. A theatre ensemble is rehearsing a piece to commemorate Victory Day on 9 May; as they put their hearts into practising their song and dance routines, they hope their city will not be seized on the opening night. The daughter of a cobbler tries her hand at being a war reporter in front of the camera while her father discusses his faith with his female customers. The fishermen hope, as usual, for a good catch. In spite of the explosions that can be heard all around the city’s perimeters, life goes on, accompanied by the pealing bells from the Orthodox Church and the squealing of the tram.

One more film with Lithuanian coproduction will participate in Berlinale. A film by Mikko Kuparinen ‘Two nights till morning‘ will be screened in the Market Screenings on 14 February. It is a romantic story about Caroline, a French architect and Jaako, a Finnish DJ, who meet in Vilnius, both being on a business trip, and end up spending the night together. They thought that it was only a one night stand, but it took them to an unexpected turn when volcanic ash cloud prevented all flights from taking off.

On 15 February don‘t miss the first fiction film from Ghana at the Berlinale, ‘Nakom‘ (by Kelly Daniela Norris and TW Pittman), edited by the Lithuanian film director Tomas Vengris. Iddrisu loves his life as a medical student in the city. He is popular and enjoys spending time with his girlfriend. When he receives the news of his father’s sudden accidental death, he returns to his village where it takes time for him to adjust. It has been a long time since he spoke his native language, Kusaal. The patriarchal order in the village is also now alien to him and he does not like his female relatives addressing him as ‘master’. And yet, as the eldest son, he feels responsible for his deceased father’s debts and for looking after his family. Together with Iddrisu, we observe village life which, although shaped by harsh toiling in the fields and a daily struggle for survival, also has a certain beauty. Iddrisu feels increasingly at home in the way of life and the traditions of his native community but at the same time he does not want to give up his plans for his future.

Kelly Daniela Norris and TW Pittman carefully accompany this young man who begins to sense that his education and experience are also needed in his village and who has to figure out whether he wants to take on this considerable task.

Read more on Lithuanian presence at the 66th Berlinale HERE.

Sales Agent: Rogue International /+33 6 98 72 55 32/, This email address is being protected from spambots. You need JavaScript enabled to view it.