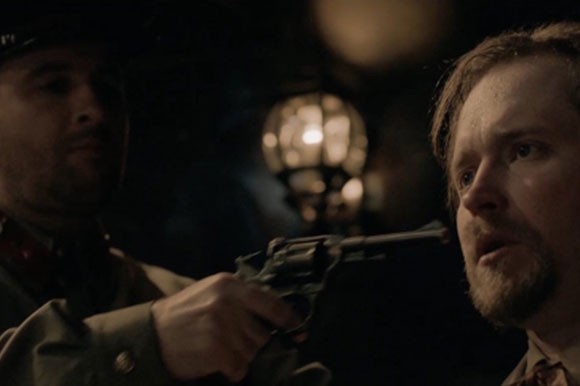 The Mausoleum by Lauri Randla

The winning films were chosen by an international jury consisting of the president of the jury, German filmmaker, screenwriter, painter, photographer, traveler and professor Ulrike Ottinger; director Filip Marczewki, whose short film Melodrama (2005) was nominated for the student Oscar by the American Film Academy, and whose debut feature Shameless (2012, Akson Studio) was included in Scanorama‘s Crossing Europe section; and Sabine Gebetsroither, programme coordinator at Crossing Europe Film Festival in Linz, Austria.

The winning film The Mousoleum is a 26 minute story, which takes place on a single night in the life of pathologist Aleksey Abrikosov and his apprentice Sasha Gavrolov, who in theory manage to overcome death by embalming the body of Lenin.

“I think Mausoleum is a dark comedy about the Soviet Stalinistic society during 1930’s. That’s why in some part the story even feels a bit anecdotic or theatrical. The story is sort of a “Stalin’s play”, as in my view everyone was degraded merely to puppets in Stalin’s “great screenplay”, especially during the 1930’s Stalin purge,” Randla said. The winning film received a prize worth 10,000 EUR in equipment for the next project. The prize was supported by Vilniaus kino klasteris.

The New Baltic Cinema short film competition jury also selected 8 Minutes, a story about a woman with a desperate desire to escape the reality and to fly away, by director Dovilė Šarutytė, as the best Lithuanian short film. Šarutytė received a prize of 3,000 EUR, supported by Audiovisual authors and producers rights association AVAKA.

The Special Jury mention went to the Latvian short Gardener (2016) directed by Madara Dišlerė and produced by Aija Bērziņa and Alise Ģelze.

Scanorama opened on 3 November 2016 and held its closing in Vilnius on 13 November, before moving on to three more cities in Lithuania, where it will run through 20 November.