FNE at Vilnius Meeting Point 2017: To Be Continued Featured 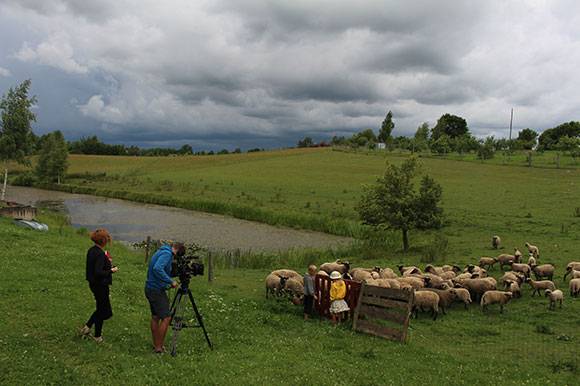 To Be Continued by Ivars Seleckis shooting

VILNIUS: Legendary Latvian helmer Ivars Seleckis is close to completing production on the documentary To Be Continued / Turpinajums. The project was presented at the “Coming Soon from Baltics” pitching session held during Vilnius Meeting Point, the industry segment of the 22nd edition of the Vilnius Film Festival – Kino Pavasaris.

This documentary captures Latvia’s future as seen by children, while observing how children’s lives are shaped by the situation in their country. Shot over the course of two years, the film follows seven children from all around the country who started attending school in 2015. Each of them leads a different life. One resides in the Latvian countryside, with parents who hope their child will become a farmer; another is staying with her grandmother while her mother works in the UK. A third child, whose grandparents came to Latvia after World War II, dreams of becoming a businessman. They are seven children at the intersection of various historical, social and economic processes.

Shooting started on 1 September 2015 and is expected to end by 1 June 2017. All 40 – and an additional 15 – shooting days are being spent on location in Latvia, primarily Riga, Liepaja, Kusa, Vecpiebalga, Roja and Stolerova. Antra Gaile and Gints Grube are producing through Latvia’s Mistrus Media. The budget of 222,000 EUR comes from the National Film Centre of Latvia through the special Centenary Program “Latvian Film For Lativa’s Centenary” (210,000 EUR) and a project development grant given by the institution (12,000 EUR). The film is expected to be completed by the end of the year with a rough cut available in August.

“Seven people’s lives. It can’t be boring. Lots has been happening with these children… We have experienced divorces, family separations. We are experiencing the expectations most parents have for their children and how they are facing them. It is a human, meaningful and poetic film about children and their emotional inner life in a specific background,” said Antra Gaile.

The Latvian premiere is set for January 2018. No sales agent or distributor is attached to the project yet.

Ivars Seleckis is the oldest documentary filmmaker in Latvia who is still actively working – the premiere of his latest film was just three weeks before his 80th birthday. His filmography acts as a bridge connecting the modern day with the legendary past of the Latvian documentary tradition, and Seleckis is one of the most prolific creators of that tradition. His 2001 film Crossroad Street received an EFA award for best documentary.

Mistrus Media
www.mistrusmedia.lv
This email address is being protected from spambots. You need JavaScript enabled to view it.