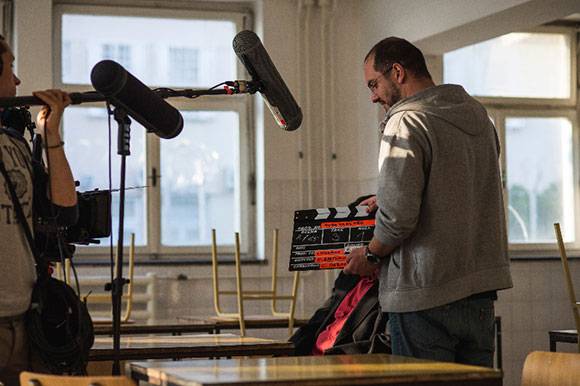 The Horizons by Svetislav Dragomirović shooting

VILNIUS: The Serbian film The Horizons / Horizonti, Svetislav Dragomirović’s debut feature, is expected to complete postproduction in July 2017. The film was presented at the “Coming Soon New Talents” pitching session at Meeting Point Vilnius, the industry event of the 22nd edition of the Vilnius Film Festival – Kino Pavasaris.

The film follows a dysfunctional family living under one roof in an unnamed rural area of Serbia. Milan is in his early 60’s, full of wrath, egoism and jealousy, while Zoran, his younger brother is confused, stubborn and emotionally crippled. Milan has a child, 16-year-old Slobodan, whose mother (Milan’s wife) passed away many years ago. Slobodan gets unintentionally involved in a mangled web of poor relationships that lead to fatal decisions. Jovanka, Zoran’s second wife, is more than 20 years younger than him. She has a different way of experiencing and expressing love and emotion. Zoran also has a child from his first failed marriage – ten-year-old Goran, the most innocent of them all, who witnesses an event that leaves an indelible mark.

Shooting took place from 1 February to 15 March 2016. All 23 shooting days were spent on location in Serbia, namely the regions of Banat and Vojvodina as well as the capital, Belgrade. Nevena Savić and Ivica Vidanović are producing through Serbia’s Cinnamon Production. With a budget of 264,501 EUR, the project was submitted for a production grant of Film Center Serbia, pending results. The film is expected to be completed by the end of July 2017.

No premiere date is set yet. No sales agent or distributor are attached to the project yet.

Svetislav Dragomirović was born in Belgrade, Serbia, in 1989. He acted in short student films before deciding to study film directing. In 2011, he began his studies at the Academy of Arts in Belgrade. Since then, he has directed a number of short documentary, fiction and animation films, as well as numerous TV commercials and music videos. His short documentary The Love Case of an Ordinary Man has screened at several film festivals and has won multiple awards. He is currently working on a script for his second feature film.