Lithuania to Present Its History and Culture in VR at Berlinale - The 68th Berlin International Film Festival and the European Film Market, an industry event, kicks off this week with the Lithuanian delegation on a ten-day mission to present Lithuanian film industry and its products to global audiences. The national stand in Berlin will, for the first time, feature virtual reality (VR) projects, a novel vehicle to convey some of Lithuania’s historical and cultural experience to film industry professionals from around the globe. This is a VR debut not just for Lithuania, but also for all three Baltic states.

In the year when Lithuania celebrates the centenary of its statehood restoration, the international film community at the European Film Market on 16-20 February will have a chance to experience, in 30 minutes, two very different VR works by Lithuanian filmmakers, Andrius Lekavičius’ interactive VR documentary Code of Freedom 1991 and Kristina Buožytė’s interactive VR animation Trail of Angels. The former uses archive footage and sound as well as researched chronology to draw viewers into the fateful events of 13 January 1991 near the TV Tower in Vilnius. In their role as media observers in a crowd of unarmed freedom defenders, the VR users will have to make a choice: either to film and document evidence of the Soviet army’s aggression, or to help wounded, peaceful protestors. Trail of Angels is an altogether 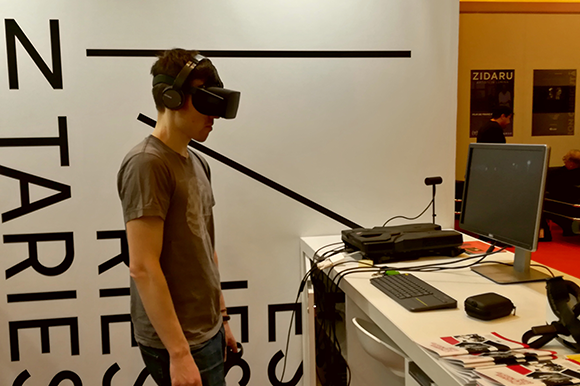 different experience, an immersive VR animation which invites the viewer to explore the enigmatic world of M. K. Čiurlionis paintings and interact with its environments and characters. The viewer travels in a mysterious Afterlife World based on M. K. Čiurlionis paintings and music, observing and interacting with the surrounding during the visually stunning day-night cycles. Starting a journey as a human being, the viewer soon realizes that he’s an Angel who contemplates the states of Life, Death and merging with the Universe.

“We are celebrating Lithuania’s anniversary with a very symbolic technological debut, an invitation not to see, but experience Lithuania. It’s a new frontier for the film industry, so we are ready to compete in the emerging VR market, too. We are happy to be able to make our debut during this inspiring time of pride and celebration. These unique artistic and historical undertakings are quite interesting to international audiences, I just hope that our filmmakers will make full use of the opportunities at the European Film Market,” says Dovilė Butnoriūtė who is in charge of the Lithuanian stand at the event.

On 16 February, Lithuanian film professionals are inviting Berliners and city guests to celebrate Lithuania’s Independence Day with a morning run on the streets of Berlin, organised by Vilnius International Film Festival “Kino Pavasaris”. The celebratory run is also an invitation to all the film talent at Berlinale to come and create in Vilnius, an international industry meeting point this March.

In 2018, the Baltic states and their film industries are often in focus and the European Film Market is no exception. The Baltic film institutions will conclude a number of important agreements about commemorating the statehood centenaries of Lithuania, Latvia and Estonia as well as fostering international cooperation. The Baltic film centres are also organising a networking evening for film industry professionals. During the event, which is also part of the centenary celebration programme, the film centres of Lithuania, Latvia and Estonia will present 12 joint projects, agreed upon at Trieste Film Festival, that will present and promote Baltic cinema in Glasgow, Moscow, Stuttgart, Copenhagen, Karlovy Vary, San Sebastian, Reykjavik, Lübeck, Tbilisi and other well-known European film festivals.

Special industry screenings will present two Lithuanian coproductions, Eglė Vertelytė’s Miracle (a co-production between Lithuania’s In Script and Bulgaria’s Geopoly Ltd, in cooperation with Poland’s Orka), which had its world premiere at the Toronto International Film Festival, and Georgian-Lithuanian coproduction Namme (directed by Zaza Khalvashi, Lithuanian production company Tremora). The first Lithuanian-Georgian project, which had been five years in the making, premiered in the competition section of the Tokyo International Film Festival. Production of both projects were supported by the Lithuanian Film Centre.