As managing director of Skalvija since 2005, Greta Akcijonaite oversees a company that has become one of the main players in cinema policies, discussions, and initiative in Lithuania. 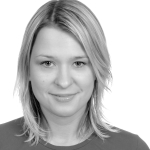 An arthouse film exhibitor belonging to Europa Cinemas and CICAE networks, Skalvija's distribution business grew out of its history as a cinema center, dating back to 1962.

The main activity of Skalvija cinema centre is non-commercial (arthouse) film exhibition and promotion. Its directive was to create exclusive and quality film programming in the cinema centre. It has since expanded and now consists of daily programme screenings of primarily European films as well a dozen of festival events throughout the year.

"We are planning to develop non-commercial (arthouse) film exhibition and to give more attention to DVD and TV rights, and to collaborate with Latvia and Estonia," says Akcijonaite. "Distribution of films committed to the youth audience is also a priority for us, because it reflects the mission of Skalvija film centre: to keep an educational profile to our activity."

In addition to her management duties at Skalvija, Akcijonaite is an organiser and programmer for the Women's Film Festival and the Student Film Festival, artistic director of the International Vilnius Film Festival Kino pavasaris, and a member of the Film Board at the Ministry of Culture.