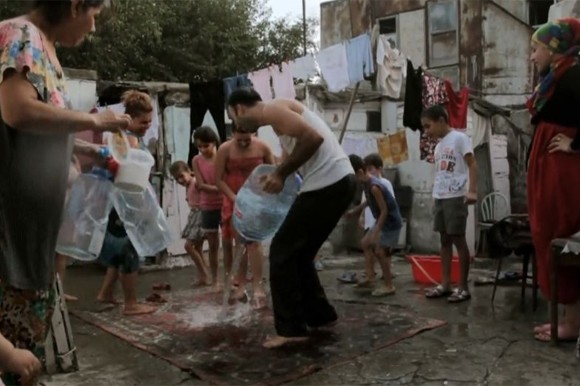 Baku from Dawn till Dusk

COTTBUS: Eighteen emerging documentary filmmakers create an omnibus film that presents a story of everyday life in Baku in Baku from Dawn Till Dusk, a coproduction from Azerbaijan and Poland premiering at the Cottbus Film Festival which concluded on 8 November 2015.

The resulting film initiated as a film school project, produced by Doc’n’World Foundation and coproduced by Polish TV, the Polish Film Institute, Belsat, and Azanfilm Studio. The film, which used Polish DoP’s on the individual segments, screened in the Islam in Eastern Europe special section of the Cottbus Festival. Financing was all on the Polish side, which paid for Polish cameramen and editors, while the directors from Azerbaijan were armed with cameras, ideas and little more, according to one of the directors.

The individual segments have been edited into one non-stop film, so that it’s not always obvious where one director’s work leaves off and the next begins. Even without being assigned topics, the directors manage to come up with a series of mini-documentaries that work together in a logical sequence to cover 18 hours across the span of a day in Baku. The film starts in the confines of an adorned white room where a man prepares to broadcast the morning call to prayer and ends with a large wedding party. The clash between old and new Baku, between modest traditional Muslim life and new Russian money flowing into the country as oil flows out, is brought out in the juxtaposition of sequences, as well as within the scenes themselves. Fishermen on a pier bemoan the quality of fish due to the oil industry. An old neighborhood is demolished and its inhabitants forcibly moved out amid tears and final goodbyes. A well-heeled young man shops for clothing in a near-empty upscale boutique, while in another scene, a shoemaker shows off the walls lined with shelves of poetry books in his ancient shop. A glorious museum of undulating lines dedicated to deceased Azerbaijan president Heydar Aliyev has more workers and staff than visitors ogling the president’s collection of cars and suits.

The story-telling is generally prosaic, but the work in particular of Polish DoP Mateusz Czuchnowski, whose oblique angles suggest that we are glimpsing life on the sly, adds an element of visual interest.