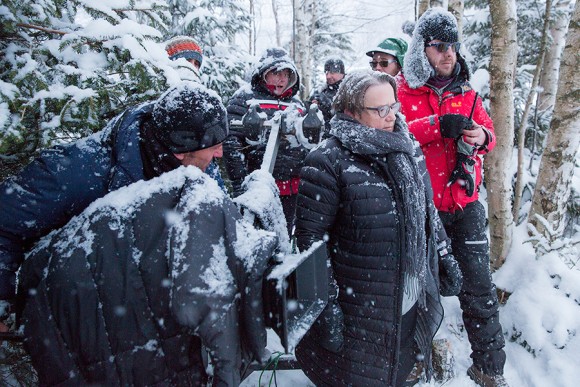 WARSAW: Agnieszka Holland has wrapped the third and final stage of the shoot for her crime thriller Game Count, a coproduction between Poland, Czech Republic, Germany and Sweden.

The shoot took place in Kotlina Kłodzka and was completed on 7 February 2016. Holland shot the film in three stages, the first taking place June and July 2015, followed by a second stage in October and the third that launched in January 2016.

The film is an adaptation of Olga Tokarczuk’s bestselling novel Drive Your Plough over the Bones of the Dead under the title Game Count/Pokot. The script co-written by Holland and Tokarczuk follows a series of murders of hunters from a small community. An elderly villager Janina finds herself a prime suspect in the police investigation. Agnieszka Mandat plays the lead. The cast includes Wiktor Zborowski, Jakub Gierszał, Borys Szyc, Andrzej Grabowski, Tomasz Kot and Katarzyna Herman.

The film is produced by TOR Film Production in coproduction with Heimatfilm GmbH (Germany), Chimney Group (Sweden)
and Nutprodukce (Czech Republic). The budget is 3 m EUR with 3.5 m PLN of production financing from the Polish Film Institute. The film also received support from the MEDIA Program and the Polish-German Co-Development Fund.

The premiere of the picture is planned for 2017. The distributor is Next Film.