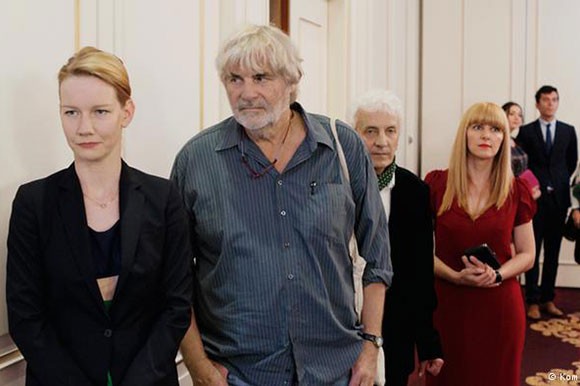 WROCLAW: German/Austrian/Romanian coproduction Toni Erdmann, directed by Maren Ade, made a clean sweep of the top prizes at the annual European Film Awards held in Wroclaw on 10 December 2016

The film, which was coproduced in by Romania’s Hi Film Productions, won the prizes for Best Film, Best Director, Best Screenwriter, Best Actor and Best Actress. It was the first time in the history of the awards that the top prize has been won by a woman director. Polish actor Daniel Olbrychski presented the award to Ade.

European star Pierce Brosnan lent glamour to the event as he picked up the award for Lifetime Achievement. But the most moving moment of the evening was when the audience rose to pay tribute to Polish director Andrzej Wajda, who passed away earlier this year. Wajda was honoured with a special award for Lifetime Achievement. Two former students of the Wajda School, Agnieszka Smoczyńska and Bodo Kox, accepted the award on Wajda’s behalf.

Poland was centre stage throughout most of the evening. The awards were coproduced and co-presented by the Polish Film Institute and opened with Magdalena Sroka, Head of PISF and Marion Doring, Head of the European Film Academy, sharing the opening speech. While Toni Erdmann undoubtedly dominated the evening, Polish filmmakers garnered awards in other categories with Body directed by Małgorzata Szumowska winning the People’s Choice Audience Award, while Radoslaw Ochnio received Best Sound Designer Award for Jerzy Skolimowski’s 11 Minutes.

Camilla Hjelm Knudsen
for Land of Mine (Germany, Denmark)
Directed by Martin Zandvliet

Stefanie Bieker
for Land of Mine

Barbara Kreuzer
for Land of Mine

Ilya Demutsky
for The Student (Russia)
Directed by Kirill Serebrennikov