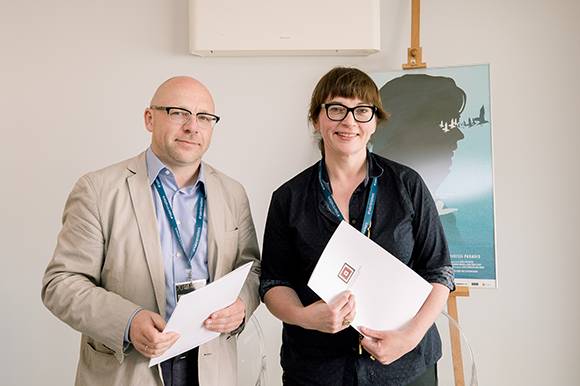 CANNES: The representatives of the Polish Film Institute and the Lithuanian Film Centre have signed an agreement to strengthen cooperation between the two national institutions in the field of cinematography and the implementation of joint film projects.

"The long shared history of Poland and Lithuania is a ready-made scenario not for one, but a dozen full-length feature films. Our film industries are developing dynamically, we are present in European cinema. Works by artists from our countries are presented at the most important international film festivals, the best example being Frost directed by Šarūnas Bartas, shown in the Quinzaine des Réalisateurs section at Cannes," said Magdalena Sroka. “We are delighted by the good co-operation and trust that producers from both countries are placing in one another. By tightening the cooperation between the Polish Film Institute and the Lithuanian Film Centre, we want to give them a clear signal that we will support the development and production of their joint film projects” added the director of the Polish Film Institute.

In 2015 in Poland, Lithuanian Film Centre had presented its film programme in a wide range. Regarding successful partnership with some of the festivals and meetings with producers we can see the increased number of co-productions between Lithuania and Poland. “We are ready to step forward so the agreement will make an impact on the creators showing them the long-term financing strategies and tendencies,” said Rolandas Kvietkauskas.

At the 70th Cannes International Film Festival, in the Quinzaine des Réalisateurs section, one of the pictures is a Franco/Lithuanian/Ukrainian/Polish co-production, co-financed by the Polish Film Institute, called Frost directed by Šarūnas Bartas and coproduced by Studija Kinema (Lithuania) and Donten & Lacroix (Poland). Among others, the film features performances by Vanessa Paradis and Andrzej Chyra.

Since 2013, Lithuanian Flm Centre has supported 9 Lithuanian/Polish co-production projects and has donated more than 1.33m EUR. At present, five projects are in development or post-production, including Krzysztof Zanussi's new film Ether and the documentary Habit and Armour by Paweł Pitera.